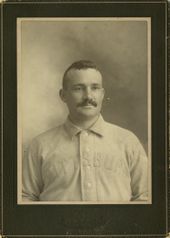 Pop Schriver is best remembered as the first catcher to catch a ball dropped from the Washington Monument, but when he was on an actual baseball field, he played 14 seasons in the major leagues, including games at five positions other than catcher.

Schriver, as pictured in a photo on some sheet music of the "The Giant's Mascot March", dedicated to the New York Baseball Team, was relatively short and husky but not fat. Pitcher Amos Rusie, also in the photo, towers over him.

Schriver was born in Brooklyn, NY and came up originally at the age of 20 with the Brooklyn Grays of the American Association in 1886. Two years later, he spent the first of three years with the Philadelphia team in the National League, first known as the Quakers and then the Phillies.

From 1898 to 1900, he was with the Pittsburgh Pirates, and hence was already on the team when Honus Wagner and Fred Clarke came over from the Louisville Colonels. He closed out his career with the St. Louis Cardinals in 1901.