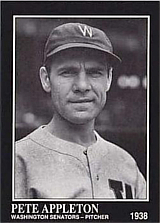 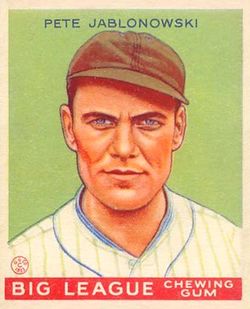 "'Psych one.' 'Psych two.' 'Psych three.' 'Batter's out.' They're going to have to change the terminology of baseball when Peter William Jablonowski does the pitching. For when Peter can't strike 'em out, he's got his mind made up to psych 'em out, which after all may be just as good, if it wins ball games." - Hartford Courant article on Pete, May 4, 1930

Pete Appleton pitched 14 seasons in the majors, mostly as a reliever but some years as a starter.

He was born Pete Jablonowski and used his birth name for the first few decades of his life. He attended the University of Michigan, where he was also a pianist and played in the band. He continued to work regularly as a musician while pursuing his baseball career. He began pro ball with the Waterbury Brasscos in the Class A Eastern League, but did graduate from U of M in 1927. In 1927, he was with the Hartford Senators in the same league before being called up by the Cincinnati Reds and making his major league debut on September 14. He spent the next season with the Reds and in 1929 was sent to the Columbus Senators of the Class AA American Association.

Sold to the Cleveland Indians, he spent the next two seasons with them. In 1932, he was sent to the Boston Red Sox, who sent him to play for the Newark Bears in the Class AA International League. He was with the New York Yankees in 1933, then back to Newark, and finally finished the rest of the season with Baltimore Orioles of the International League. While with Baltimore, he legally changed his name to Appleton from Jablonowski (which literally translates to Appleton with Jablko being Polish for apple). The change of name was apparently at the urging of his wife, Aldona Leszczynski, who did not want to add a second complex Polish surname to her name. She would become a successful lawyer and only the second woman to be appointed a judge in New Jersey.

The 1934 season found Pete splitting the year between Baltimore and the Rochester Red Wings of the International League. In 1935, he spent the entire season with the Montreal Royals and led the International League with 23 wins. Drafted by the Washington Senators, he spent the next 7 seasons in the majors with them, the Chicago White Sox, and the St. Louis Browns. In November 1942, when he was 38 years old, Appleton received a commission in the Navy and spent most of his time stationed at Chapel Hill, North Carolina, playing baseball for Navy Preflight. He was released from the Navy on June 28, 1945 with the rank of Lieutenant. He pitched for the Browns on July 12th and then went back to the Senators for the final games of his major league career, having pitched in 343 games. He continued to play in the minor leagues until 1951.

Appleton later scouted, coached and managed in the minor league system for the Washington Senators/Minnesota Twins from 1954 until his death in January 1974 at the age of 69.