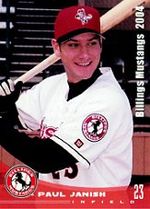 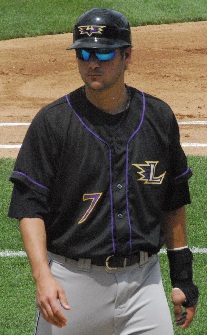 Janish joined Team USA for the summer of 2003 but hit just .105, the worst of any of their position players by over 100 points. He played third base behind Tyler Greene because Dustin Pedroia manned short. Janish came up big in the semifinals of the 2003 Pan American Games, hitting a 14th-inning game-winning sacrifice fly against Francisco Campos to score Seth Smith and get the US into the finals. The US lost to Cuba in the Gold Medal game to finish with Silver.

In 2004, Janish hit .345 and slugged .544 for Rice; he tied for the team lead with 60 RBI and was second in average but they fell to 11th in NCAA Division I. He tied Adam Rodgers for the WAC lead in RBI and was 9th in average. He was the All-Conference selection at shortstop for the second time in three years.

He was selected by the Cincinnati Reds in the fifth round of the 2004 amateur draft. He was signed by scout Mike Powers and made his pro debut that summer with the Billings Mustangs, hitting .263/.346/.406 with 2 home runs and 22 RBIs in 66 games there. Janish led the Pioneer League's shortstops with a .975 fielding percentage. Baseball America rated him the best defensive infielder in the Cincinnati system.

Janish was with the Dayton Dragons the next year and hit .245/.346/.385 with 5 homers and 29 RBIs in 55 games before being sidelined by Tommy John surgery in June and missing the rest of the season. He was again named the best defensive infielder in the Reds organization by Baseball America.

In 2008, Janish opened with Louisville, batting .293/.343/.439 in 35 games. When Jeff Keppinger was injured, Paul was called up to the majors. He debuted in the 8th inning of a game against the Marlins with a 6-0 lead; he entered at shortstop and Jerry Hairston Jr. moved to left field. It was a double switch as Janish batted 9th, taking Bronson Arroyo's lineup slot. Janish was immediatelly called on to field grounders from Cody Ross and Jeremy Hermida to open the inning. He batted against Justin Miller in the bottom of the frame and flew out to Luis Gonzalez. Cincinnati blew the lead and Florida tied it in the 9th. In the bottom of the 10th, Janish came up against Renyel Pinto with two on and two out. He then singled to right for his first big-league hit, scoring pinch-runner Johnny Cueto with the game-winner.

In 2009, he set the dubious record for highest, post-1900 career ERA among all those with two or more innings pitched at 49.50, beating the previous mark of 40.50, held by David Moraga and Keith Osik.

Janish returned to Rice as an assistant coach in 2018.