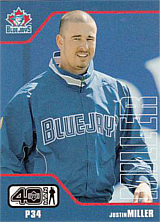 Originally selected by the San Francisco Giants in the 34th round of the 1995 amateur draft, Miller did not sign, opting to attend Los Angeles Harbor College instead. He was then taken by the Colorado Rockies in the fifth round of the 1997 amateur draft and began his pro career that summer with the Portland Rockies. Following the 1999 season, he was dealt to the Oakland Athletics as part of a three-team trade. He spent two years in the A's chain, primarily with the Triple A Sacramento River Cats, before being sent along with Eric Hinske to the Toronto Blue Jays for Billy Koch.

(Years later, when Miller and Koch were trying to make the Blue Jays together one spring, Koch dared Miller to get a tattoo on his posterior that read "I Love Billy Koch". Miller complied, replacing Love with a heart, and the Miller clan (Justin and wife Jessica) were compensated by Koch somewhere along the lines of $1,500 to $2,500 for the ink.)

Miller reached the majors with the Blue Jays in 2002, spending most of the year at the big league level and going 9-5 with a 5.54 ERA in 25 appearances (18 starts). After making only one minor league appearance the next summer due to a shoulder injury, he was 3-4 with a 6.06 ERA over 19 games for Toronto in 2004. He only pitched in one big league game in 2005, spending most of his time with the Syracuse Sky Chiefs before being released in July.

Miller started 2006 in the Tampa Bay Devil Rays organization with the Durham Bulls before being let go in April. He moved on to Japan, pitching in a dozen games for the Chiba Lotte Marines. He was signed by the Philadelphia Phillies in early 2007 but was released after just 3 relief outings for the Ottawa Lynx. He then signed with the Florida Marlins and joined the Albuquerque Isotopes, recording 6 saves and a 1.50 ERA in 11 outings. He was brought back to the majors, where he remained the rest of the year, and went 5-0 with a 3.65 ERA in 62 relief appearances for Florida. He spent most of 2008 at the big league level with the Fish, going 4-2 with a 4.24 ERA in 46 games, and became a free agent after the season.

Following the 2008 campaign, Miller signed with the San Francisco Giants. He spent the entire 2009 season with them and was 3-3 with a 3.18 ERA in 44 games out of the bullpen. After that season, he moved on to the Los Angeles Dodgers, splitting 2010 between the major league club and Triple Albuquerque. On July 18th of that year, he appeared in his final big league game, facing just one batter against the St. Louis Cardinals and giving up an earned run. He split 2011 between the Seattle Mariners, Texas Rangers, and Los Angeles Dodgers systems.

Due to the tattoos covering his arms, Major League Baseball required Miller to wear long sleeves every time he pitched, as his colorful tattoos were allegedly distracting opposing hitters. This became known as the "Justin Miller Rule".