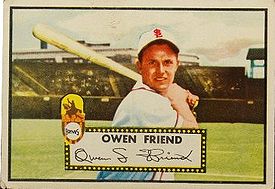 Before the 1944 season Owen Friend was signed by the St. Louis Browns as an amateur free agent. The 6'1" seventeen-year-old infielder was assigned to the Newark Moundsmen of the class D Ohio State League where he appeared in 129 games and hit .281. In 1945 Owen was with the Raleigh Capitals of the class C Carolina League, hitting .281 again and spent the last 8 games of the year with the Memphis Chickasaws hitting at a .345 clip.

The infielder played until 1949 before getting his chance in the major leagues. There was some ill-advised comparison of Owen to Rogers Hornsby at the time, and in a late-season recall to the Browns in 1949 he was 3 for 8 at the plate for a .375 average, but comparisons to Hornsby soon faded when he hit .237 for the Browns in 1950 in his first full season in the majors.

After spending two years with the United States Military during the Korean War, he went from team to team playing for the Detroit Tigers, Cleveland Indians, Boston Red Sox and Chicago Cubs from 1953 to 1956, in between trips to the minor leagues, finishing his major league career in a very un-Hornsby-like .227.

Owen, or "Red" as he was sometimes called, spent a few more years in the minors finishing up his last full-time active year with the Wenatchee Chiefs of the class B Northwest League in 1960. Friend spent 15 active seasons in the minors as a player, appearing in 1,450 contests, going to bat 5,067 times, banging out 1,285 base hits. including 139 home runs for a .253 minor league career batting average.

Friend resided in Wichita, KS, where he was employed with the Boeing Company before his death on October 14, 2007, at eighty years of age.