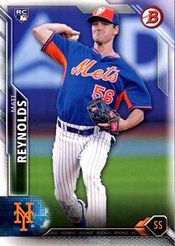 The Mets added Reynolds to their roster for the 2015 NLCS, but his services were not required in a game as the Mets swept the Chicago Cubs in four games; in the World Series, he was replaced on the roster by Juan Uribe, thus missing a chance to become only the second player of the modern era, after Mark Kiger, to make his big league debut in the postseason. Ironically, Raul Mondesi took that title during the World Series, but with the Kansas City Royals.

Reynolds did make his major league debut for the Mets in 2016, in a regular season game on May 17th, when he went 0 for 3 as the team's starting third baseman against the Washington Nationals. He played 47 games that season, hitting .225 with 3 homers and 13 RBIs while starting games at four diffeernt positions. In 2017, he again split the season between AAA and the majors. With the Mets, he played six positions (adding RF and 1B to the SS, 2B, 3B and LF he had played the previous year), and hit .230 with 1 homer and 5 RBIs in 68 games. His ability to play multiple positions was clearly his biggest asset.

On February 12, 2018, his contract was purchased from the Mets by the Washington Nationals.