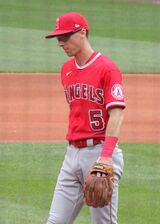 Matt Duffy made his big league debut with the San Francisco Giants on August 1, 2014, starting at second base against the New York Mets. The Giants had struggled all season to find a second baseman, with projected starter Marco Scutaro being limited to a handful of games because of recurring back problems. In desperation, the Giants had given a shot to disgraced Atlanta Braves second baseman Dan Uggla, but he proved to be unable to contribute either with the bat or glove, so they released him and promoted Matt from the AA Richmond Flying Squirrels, hoping that he would be able to provide something to the team.

Duffy was an 18th round pick in the 2012 amateur draft, out of California State University, Long Beach where he was a defense-first middle infielder with little power. He had an unremarkable professional debut, hitting .247 in 47 games for the Salem-Keizer Volcanoes of the Northwest League that year. However, he took a big step forward in 2013, splitting his season between the Augusta GreenJackets of the South Atlantic League and the San Jose Giants of the California League, putting up a combined batting line of .303/.389/.443 in 104 games while playing shortstop. He made the Giants top 20 prospects list after the season, coming in at #18, and was assigned to AA Richmond in 2014. There he continued to hit well, putting up a batting average of .332 in 97 games, with an OBP of .398 and making good on 20 of 24 steal attempts before getting the call to the Show. He had only played three games at second base as a professional before getting the start at the position in his debut, but he handled 6 chances flawlessly and turned a double play; at the plate, he went 1 for 4, his first hit a single off Jon Niese in the 7th that drove in Hunter Pence as the Giants won, 5-1. It was, however, another rookie, Joe Panik, who turned out to be the solution at second base for the Giants, but Duffy stayed with the team as a utility infielder. He hit .267 in 34 games and was kept on the postseason roster. He went 1 for 6 with 2 runs scored in 8 games as the Giants won their third World Series title in five years.

Duffy made the Giants' roster as a back-up infielder in 2015, seeing time at all four infield positions in his first 10 games. On April 15th, he hit his first career homer off Boone Logan of the Colorado Rockies, a solo shot in 4-2 loss. He soon took over as the team's starting third baseman in place of off-season acquisition Casey McGehee, who was struggling with the bat, even though he had hardly played the position in the minor leagues. His new status was confirmed when the Giants sent McGehee to the minors in May and released him on July 8th. That made him in effect, the successor to the very popular Pablo Sandoval, who had left as a free agent after the Giants' World Series title. In 149 games that year, he hit .295 with 28 doubles, 6 triples and 12 homers, scored 77 runs and drove in as many. He seemed to have claimed the starting third base job for the foreseeable future, but on June 20th, he was placed on the disabled list with a strained Achilles' heel, and his career was derailed. At the time of the injury, he was hitting .253 with 4 homers and 21 RBIs in 70 games - production below that of the previous season, but nothing to panic about. However, his injury was one of a number that affected Giants infielders in the first half - Joe Panik and Ehire Adrianza were also stricken - which led the Giants to acquire IF Edwin Nunez from the Minnesota Twins when they began the second half in a deep slump. That left no spot for Duffy as he was about to return to action, and on August 1st, he was the main piece used to acquire P Matt Moore in a trade with the Tampa Bay Rays (the Giants also sent minor leaguers Lucius Fox and Michael Santos in the deal. That left open the question of where Matt would play, as manning third base for the Rays was the best player in team history, Evan Longoria.

After a short rehabilitation assignment, Duffy was placed on the Rays' 25-man roster on August 11, 2016, replacing Richie Shaffer. The Rays put him at shortstop, moving Brad Miller to first base, as they were seeking improved defence at the position.