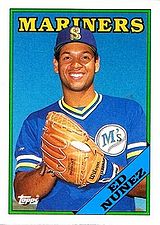 Ed Nunez played 13 seasons in the majors, primarily as a member of the Seattle Mariners bullpen.

Nunez made Seattle's Opening Day roster as an 18-year-old in 1982, becoming the youngest player in the majors at the time. He made his big league debut on April 7th, giving up 1 earned run in 3 1/3 innings of relief work against the Minnesota Twins. Less than two weeks later, he made his first start, going 5 2/3 innings against the Oakland A's on April 18th, but did not earn a decision. In his next start, he collided with Twins player Gary Ward and suffered a fractured hand. After recovering from the injury, he spent most of the year with the AAA Salt Lake City Gulls but was back with Seattle in September, making several more starts. He earned his first major league win on September 19th against the Texas Rangers, and overall, he was 1-2 with a 4.58 ERA in 8 outings that year.

After splitting the next two summers between Seattle and Salt Lake City, Nunez became the Mariners' closer in 1985. In 70 relief appearances that year, he went 7-3 with a 3.09 ERA and 16 saves. However, he struggled with injuries to begin 1986 and spent much of the season with the AAA Calgary Cannons. He was back in the majors in September and made his first big league start in more than three years on September 9th, picking up the win against the Rangers. He again had a prominent role in the Mariners' bullpen in 1987, saving 12 games in 48 outings. However, he struggled to start the next season, going 1-4 with a 7.98 ERA in 14 games in the first half of 1988, and in July, he was dealt to the New York Mets for Gene Walter. Following the trade, he made 10 appearances for the Mets, recording a 4.50 ERA and 1 win.

Nunez is the cousin of minor leaguer John Burgos.