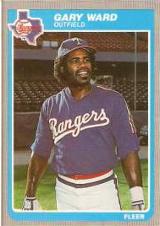 Ward hit for a cycle in his 14th major league game, the quickest player to achieve the feat. He accomplished it on September 18, 1980 while playing for the Minnesota Twins. His son Daryle also hit for the cycle, in 2004, making them the first father/son duo to ever do so. There would not be another until Cavan Biggio joined his father Craig in 2019.