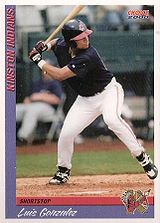 Luis Alberto Gonzalez last played for the Yomiuri Giants in 2008.

Known for his ability to play just about anywhere, Gonzalez started at four positions in one week's time for the Rockies in 2004 - shortstop, rightfield, first base and designated hitter. Gonzalez hit a solid .292/.328/.469 in 102 games for Colorado as the Rule V selection was used as a solid backup, producing a 89 OPS+.

Luis hit .292/.333/.421 for a 87 OPS+ for the Rockies in 2005, remaining a productive substitute. On July 9th, he hit a double, driving in the lone run of the night. That run beat the San Diego Padres, 1-0, in what was the first 1-0 game ever played in Coors Field's 847-game existence. The native-born Venezuelan had a career game on September 20th when he collected 4 RBI helping the Rockies to a 20-1 win over the Padres.

After the 2006 season, Luis was sold to the Yomiuri Giants. He won the second baseman job in 2007 after Toshihisa Nishi and Makoto Kosaka were among the failures there the prior season. He started the year 3 for 14 with a home run and a hit-by-pitch before being sidelined by pain in his left hand on April 6th, causing him to be sent down to ni-gun for rehab. He hit .247/.291/.425 in the 25 games he played with Yomiuri that year.

Gonzalez opened 2008 in ni-gun but was called up when Seung-yeop Lee was sent down, freeing up a gaijin slot. Gonzalez was hitting a very solid .307/.357/.421 in 32 games before controversy arose. He tested positive for clobenzorex, amphetamine and parahydroxyamfetamine, three banned stimulants. Gonzalez denied taking the substances, which carried a one-year suspension; he said he had used stimulants in 2003 and 2004 when in the USA. It made him the second player in NPB history to be suspended for using banned substances, following Rick Guttormson. Gonzalez appealed the suspension, which was upheld. He was released by Yomiuri.

The Rockies signed the scandal-plagued Gonzalez for 2009 but he did not appear in their system that year.

He was recruited by the Brother Elephants for 2010 but they decided not to sign him due to his doping history.