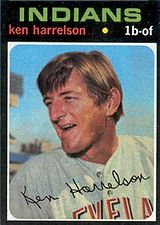 First baseman/outfielder Ken Harrelson played nine years in years and is credited with bringing the batting glove to the majors. Since his playing days, he has been a longtime broadcaster and was briefly Chicago White Sox General Manager.

Nicknamed "Hawk" by Duke Sims because of his distinct nose, Harrelson was signed by the Kansas City Athletics out of high school and reached the majors with the club in 1963. e became the team's regular at first baseman in 1965, when he hit .238 with 23 home runs. The next June, in 1966, hitting .224 with 5 homers, he was dealt to the Washington Senators for pitcher Jim Duckworth. Less than a year later, his contract was sold back to the Athletics.

Harrelson hit .305 with 6 home runs in 61 games with Kansas City in 1967 but was released after less than three months with the club following a public spat with owner Charles Finley. After shopping his services to several clubs, he signed with the Boston Red Sox for $73,000 several days later. The Red Sox went on to reach the World Series, but he struggled at the plate, hitting just .077 in 4 games as Boston fell to the St. Louis Cardinals in 7 games.

Harrelson was Boston's regular right fielder in 1968, and he hit 3 homers in a June 14th game against the Cleveland Indians. He ended the year with a .275 average and 35 home runs while leading the American League with 109 RBI. He made the All-Star team, finished third in Most Valuable Player Award voting, and won The Sporting News Player of the Year Award for the AL. Early the following season, 1969 he was sent to the Cleveland Indians as part of a six-player trade. He clubbed 30 homers and stole a career-best 17 bases between the two teams that year.

During Spring Training in 1970, Harrelson broke his leg, and he did not return to the team until September, playing in just 17 games. Hitting just .199 through 52 games in June 1971, he retired at age 29, deciding to give professional golf a shot.

While Harrelson's career batting average of .239 at first appears modest, he played during the second deadball era when league averages were quite low. His .275 batting average in 1968 was ninth in the league, since that year was a historical low for the American League. Since he added a lot of walks and decent power (his high was 35 home runs in 1968, finishing third in the league), he was an above-average hitter with a 110 OPS+, about average for a 1B/OF. He also stole some bases, finishing in double figures three times. While his career was short, it was very high profile. He was known as baseball's sharpest dresser, embracing the fashion-forward styles of the late 1960s and early 1970s, including Nehru jackets and boldly-colored suits. His propensity to dress in a flashy manner landed him on the cover of Sports Illustrated in its September 2, 1968 issue, wearing a light blue suit with the title "The Swinger".

Following his playing days, Harrelson played professional golf for several years, most notably competing in the 1972 British Open. He was then a Red Sox broadcaster for several years before joining the Chicago White Sox broadcast team in 1982. Following the 1985 season, he became the club's general manager, a position he held for a year, during which time he fired manager Tony LaRussa. After a stint as play-by-play man for the New York Yankees in 1987 and 1988, he rejoined the White Sox broadcast team in 1990 and has held that position for almost three decades. In May of 2017, he announced that he would retire at the end of the 2018 season after a limited schedule of games that final year, mainly Sunday road games. He was to be replaced by Jason Benetti, who joined the Sox broadcast team in 2016. He worked his final game on September 23rd, a Sunday home game against the crosstown Chicago Cubs. He then continued working for the White Sox as a team ambassador.

At a time when broadcasters are usually very prudent - some would say bland - and are kept on a short leash lest they offend a segment of the listening community, Harrelson is known for rooting unabashedly for the Sox while describing a game, and letting his mouth run on occasions. Among his popular sayings are "You Can Put It On the Board, Yes!" when a member of the White Sox hits a home run, and "He Gone" after a pitcher records a strikeout. A classic case of Hawk letting his mouth run was during a broadcast on May 30, 2012, when he disagreed with home plate umpire Mark Wegner's decision to eject Chicago pitcher Jose Quintana for throwing a pitch behind a batter. His commentary ran thus "That is absolutely brutal! That is totally absurd! Send him back to school and teach him what this game is all about! ... Here's an umpire in the American League that knows nothing about the game of baseball." He was given a stern talking-to by Commissioner Bud Selig the following day. In 2017, he followed the White Sox's visit to Wrigley Field by bad-mouthing the historical ballpark and saying he would never go back there again: "Worst press box, worst booths for television. It’s a joke. It really is," was his assessment.

Following his retirement, he was voted the winner of the Ford Frick Award for excellence in baseball broadcasting in 2019.