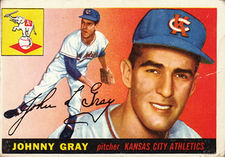 Johnny Gray was signed as an amateur free agent by the New York Yankees before the 1950 season. The 6'4" righthander was assigned to the Amsterdam Rugmakers of the Canadian-American League, appeared in 19 games, won 10 and lost 4 with a 3.86 ERA. He spent three more years in the minors, from 1951 to 1953 before the Yankees traded him to the Philadelphia Athletics in 1953. He reached the majors with the A's in 1954, in their final season in Philadelphia, when he put up a record of 3-12.

Johnny was also with the Athletics in their first season in Kansas City in 1955, but he was then sold to the Cleveland Indians on October 13th. In 1956 he was with the AAA Indianapolis Indians, where he was the roommate of Roger Maris, married a local woman who was Miss Universe, and posted the best ERA in the American Association at 2.72 while winning 10 and losing 7.

His ERA was 1.84 with the San Diego Padres of the Pacific Coast League in 1957 when he was called up to the Indians after Herb Score was hit by Gil McDougald's line drive, putting him on the disabled list. His only victory for Cleveland was a shutout which turned out to be his final win. On December 2nd he was drafted by the Philadelphia Phillies from the Indians in the 1957 Rule V Draft. Johnny finished up his major league time with the Phillies in 1958 with a 4-18 major league career record and a 6.18 ERA.

Gray spent two more years in the minors, with little luck, going 3-11 with five different clubs and after eleven active years in pro baseball (1950-1960), the 33-year-old pitcher decided to seek other avenues. He finished up his minor league stat sheet with 274 appearances, winning 71 and losing 75, while pitching 1,463 innings, giving up 1,232 base hits along with 820 base on balls for a 3.59 ERA.