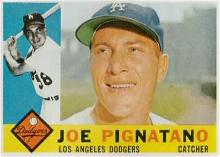 Joe Pignatano played six years in the majors and appeared in the 1959 World Series.

He became the first big leaguer to hit into a triple play in his final major league at-bat.

Signed in 1948 by the Brooklyn Dodgers, Joe spent many years in the Dodgers minor league organization. Roy Campanella was the Dodgers' regular catcher for all of that time, and Johnny Roseboro was another catcher trying to get to the bigs. Roseboro and Pignatano both made their major league debuts in 1957, the Dodgers' last season in Brooklyn. Pignatano missed the 1951-1953 seasons due to military service at the time of the Korean War.

Before the 1958 season, when the Dodgers relocated to Los Angeles, Campanella was left paralyzed in an automobile accident, opening the way for Roseboro and Pignatano to take his place. Roseboro won the starting job, but Joe hit 9 homers in only 142 at-bats that season. He was again Roseboro's back-up when the Dodgers won a surprise pennant in 1959, then after one more season of backing up Roseboro without getting many at-bats in 1960, he shared the starting job with Haywood Sullivan for the Kansas City Athletics in 1961, hitting .243 in 92 games. He then split the 1962 season between the San Francisco Giants and New York Mets, being one of the large number of players to see action for the woeful expansion Mets team that set the record for most losses in a season.

Playing for the Fort Worth Cats in 1955, Pignatano was listed as the number 8 batter in the lineup on May 29th. In the 2nd inning he went to the plate in the number 7 spot and hit a home run. On appeal by the opposing Shreveport Sports, the hit was nullified and the proper batter, Maury Wills, was called out. Pignatano then batted in the number 8 spot, and hit another homer.

Pignatano is the second cousin of Pete Falcone.