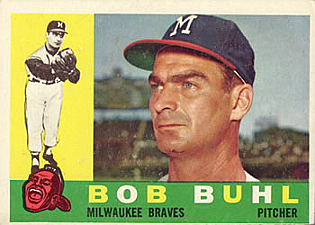 "I was liked on my team, but opposing teams didn't care too much for me because I was mean on the mound. I'd brush guys back; I didn't care who they were. And I was wild to begin with, so that helped me out. Right-handed batters didn't like to face me too much. The fellows I didn't have trouble with I didn't have to bother with. I always figured they were looking for the brushback, so I'd keep them waiting. I wouldn't let them dig in. They were thrown off stride because I had a herky-jerky motion and was quick. I was a short-armed pitcher, and instead of moving way back, and way forward, I'd let loose tighter to my body." - Bob Buhl, to Danny Peary, We Played The Game

Buhl was born in Saginaw, MI, and attended high school there. He spent 1947 to 1950 in the minors, most notably going 19-10 in 1947 for the Madisonville Miners of the Kitty League. He was in the service in 1951 and 1952 and made his major league debut in April 1953, never going back to the minors. A winner in double figures an impressive ten seasons, Bob saw his greatest success pitching alongside Warren Spahn and Lew Burdette with the great Milwaukee Braves teams of the 1950s. As a rookie, he finished 13-8 with a 2.97 ERA, ERA good for third best in the NL and the first of six times he would make an ERA leaderboard. He enjoyed an 18-7, 2.74 record in 34 games in the 1957 championship season, leading the NL in winning percentage while scuffling to a 10.80 ERA in two starts in the Fall Classic. He led the NL with four shutouts in 1959, en route to a 15-9, 2.86 campaign, then made his only All-Star appearance in 1960 (6.75 ERA in 1 1/3 innings, allowing a home run to Al Kaline) with a 16-9, 3.09 record and single season best 121 strikeouts.

After one start in 1962, Bob was dealt to the Chicago Cubs for Jack Curtis. Buhl continued to provide solid innings, albeit with not quite the success he had enjoyed with Milwaukee. He did finish 15-14 with a 3.83 ERA in 1964 But he is better known, during his Cubs tenure, for his lack of success at the plate. Between a lone at bat in his lone game with Milwaukee and his remaining season on the North side of Chicago, Bob was 0-for-the-1962 season, to the tune of an 0-for-70, part of an 0-for-87 streak that remains a big league record. He got a hit one of the first times he tried experimenting with hitting left-handed, but this proved to be a fluke and subsequent at bats from the other side of the plate proved as futile as his normal at bats. In a weird coincidence, Bob was dealt following one start in 1966, marking the second time in his career he made one start and got flipped. This time, it was to Philadelphia, with Larry Jackson, for Adolfo Phillips, John Herrnstein and a 23 year old pitcher who had only made 8 appearances in the bigs. That young man? Ferguson Jenkins. As Jenkins began ripping through the National League, Bob was long gone, having staggered to a 6-8, 4.96 mark over the rest of 1966 with three final appearances as a big leaguer the following season.