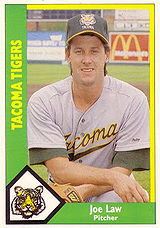 Joe Law pitched in the minor leagues for a decade, including part or all of four seasons at AAA. He was 64-49 overall. Twice, he led his league in winning percentage. He was on the major league roster of the Oakland Athletics for four days once in 1988 but never appeared in the show. Joe's son Derek Law was picked in the 2009 amateur draft and the 2011 amateur draft, signing the second time.

Law split 1988 between Huntsville (9-3, 2.56) and Tacoma (5-3, 3.93). He was 5th in the Southern League in ERA, edging out Pete Harnisch. His callup to Oakland came in early July as Eric Plunk went on the 15-day disabled list. He was supposed to get a start at Cleveland on July 5, but Dave Stewart was able to take his regular turn, and Law watched from the bullpen.