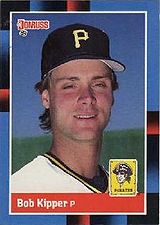 Pitcher Bob Kipper was the 8th player selected in the 1982 amateur draft, by the California Angels. He had an outstanding season for the Redwood Pioneers of the California League in 1984, going 18-8, 2.04 in 26 starts. He allowed only 147 hits in 185 innings. His K/W ratio, however, was relatively modest, at 98/65. In any case, the Angels thought they had a budding superstar on their hands, and inspired by the success of Dwight Gooden at a very young age with the New York Mets the previous season, rushed Bob to the majors, having him start the 1985 season in the American League. He made his debut on April 12th, in a relief appearance against the Oakland Athletics, but he was hit hard; the same thing happened in his next outing, on April 23rd, against the same A's, and the Angels sent him down as he had given up 8 runs in 3 1/3 innings. Kipper then pitched for the AA Midland Angels, going 3-3, 3.08 in 9 starts, and was moved up to the AAA Edmonton Trappers. He pitched only one game there before he was traded to the Pittsburgh Pirates on June 7th.

The Pirates at the time had realized that they could no longer try to stretch the remnants of the 1979 World Series-winning team any further. They had tried to prop up the few players left from that team with some aging veterans, to no avail. By June of 1985 they knew it was time to start afresh, thus their motivation for dealing three of those veterans, Ps John Candelaria and Al Holland and OF George Hendrick, to the Angels in return for some young talent. The three players they got back were all quite promising; in addition to Kipper, there was reliever Pat Clements and OF Mike Brown. Clements and Brown turned out to be useful players for a short spell, but it was Kipper who had the longest career of the three in the big leagues. In the immediate, he simply switched teams in the Pacific Coast League, from Edmonton to the Hawaii Islanders, and was a combined 3-0, 1.99 between the two. He was brought up to Pittsburgh when rosters expanded in September and was 1-2, 5.11 in 5 games, including 4 starts. His first big league win came on September 22nd, when he gave up 3 runs over 8 1/3 innings in defeating the Mets, 5-3.

The Pirates inserted Bob in their starting rotation in 1986 and he went 6-8, 4.03 in 20 games, including 19 starts. The 6 wins would be his career high, just like the 114 innings he pitched that year. In 1987, he had similar but worse numbers, 5-9, 5.94 in 24 games, covering 110 2/3 innings. Kipper was obviously not turning into the dominant starting pitcher the Bucs had hoped for, and in 1988, he was moved to the bullpen. There he found his proper role in the big leagues, not a glamorous one, but a useful one as a left-handed middle reliever who could pitch multiple innings. He was 2-6, 3.74 in 50 games and 65 innings that season, then followed that with a 3-4 record, a 2.93 ERA and 4 saves in 52 games and 83 innings in 1989. In 1990, the Pirates won a division title - the first of three consecutive ones - and he contributed a 5-2 record with a 3.02 ERA in 41 games. He also made the final start of his big league career that season, his only one from 1988 to 1992. He was not used in the postseason that year, but in 1991, he got to have a taste of postseason play. He went 2-2, 4.65 in 52 games for the first-place Pirates with 4 saves in 52 games pitched. His lone postseason appearance came in Game 3 of the NLCS against the Atlanta Braves on October 12th. He came in to pitch the 6th inning with the Bucs trailing, 6-2, and gave up a run in two innings of work. The highlight of that appearance was that Braves pitcher John Smoltz managed to single off him and then to steal second base, an exceedingly rare occurrence for a pitcher in a postseason game, and not an easy feat considering that Kipper was generally tough to run against and that the Pirates had the rifle-armed Mike LaValliere behind the plate.

Kipper became a free agent after the 1991 season and signed with the Minnesota Twins, coming off a World Series win, for 1992. The results were very similar to the previous year, as he was 3-3, 4.42 in 25 games, logging 38 2/3 innings. He pitched pretty well in the early going, with an ERA of 3.10 at the end of June, but he gave up 7 runs in 1 1/3 innings in his last two outings, ruining his ERA. The Twins cut him loose at the end of July, giving him his unconditional release. He did not pitch again that season or in 1993, but in 1994 attempted a comeback with the Norfolk Tides, an affiliate of the New York Mets. Things did not go well, as he put up an ERA of 7.82 in 9 games and was released again, ending his playing career. He ended up with a record of 27-37 in 8 seasons and an ERA of 4.34.

Since his retirement, Bob has worked as a minor league pitching coach for many years. He spent 2002 with the Boston Red Sox as a bullpen coach. In 2015, when manager John Farrell had to take an extended leave of absence to undergo chemotherapy, it created a domino effect among the coaching staff. Bench coach Torey Lovullo was named interim manager, bullpen coach Dana LeVangie took his place as bench coach, and Bob was called up from the AAA Pawtucket Red Sox to be the new bullpen coach, starting on August 17th.