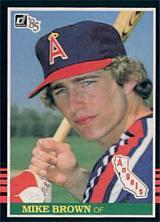 A great minor league hitter with the California Angels, Mike Brown's great half season in 1985 stands as the peak of his career. He hit .332 in 57 games and filled Pittsburgh Pirates fans with hope. A year and a day after his first game with the Pirates, he was sent down to Triple A as he hit only .218 in 1986. The outfielder to his right was Barry Bonds, and the next spring training Andy Van Slyke was acquired, furthering reducing his chances of getting another shot at regular play. Brown was released that spring. Pirate fans of the mid-1980s remember him with great fondness and sadness for what might have been. A catcher in college, he converted to the outfield in the Angels system.

Brown might have been the first Pirate casualty of the arbitration system, since he had 3 years and 4 days worth of service when he was released. Sadly, he would not be the last.