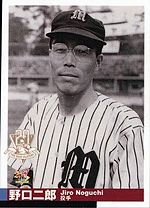 One of the greatest early pitchers in Nippon Pro Baseball history and rated by analyst Jim Albright as the 12th-best player ever in NPB, Jiro Noguchi was the younger brother of Akira Noguchi and the older brother of Noboru Noguchi and Wataru Noguchi.

He was a catcher in elementary school and a third baseman in high school. When the staff ace was injured, he became a pitcher, a role he would star in. The school won two Koshien Tournament titles under his leadership. In the summer Koshien of 1937, he beat a team that included future Hall-of-Famers Tetsuharu Kawakami and Masaki Yoshiwara. He tossed four straight shutouts in the 1938 spring Koshien to win the second title.

He began his professional career with the 1939 Tokyo Senators. A workhorse, he was 33-19, 2.04 on the mound, throwing 459 innings over 69 games. He was sixth in the Japan Baseball League in ERA, slightly edged Victor Starfin for the IP lead, threw in the most contests, completed the most games (38) and led in hits (364) and homers (17) given up. He hit .251/.315/.301 at the plate, playing the field regularly (at 1B and OF) when not pitching. He set the rookie record for wins in Nippon Pro Baseball, broken 22 years later by Hiroshi Gondo.

After retirement, Noguchi worked as a manager in the minor league system of the Kintetsu Buffaloes. He also coached for the Hankyu Braves and Mainichi Orions.