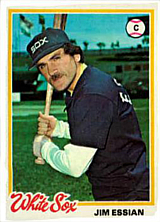 Jim Essian played twelve seasons in the major leagues, mostly as a catcher, and went on to a second career as a manager in the minors and majors. As a hitter, he knew how to draw a walk and had moderate power. He had seven stops in the majors, and in his best year with the bat hit 10 home runs with a .374 on-base percentage for the Chicago White Sox in 1977, a team which won 90 games.

He hit an inside-the-park grand slam on June 10, 1979 as a member of the Oakland A's against the Toronto Blue Jays. Mike Willis was the pitcher.

Essian's son, also named Jim, played in the minors in 1999-2006. He is the uncle of Chris Demetral, Mike Demetral, Scott Demetral and Ted Demetral. Essian managed Chris when he guided the Greek national team to fourth place at the 2010 European Championship.

In 1989, Jim Essian played for the Gold Coast Suns of the Senior Professional Baseball Association.