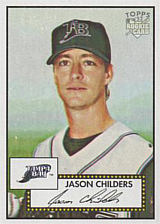 Jason Childers pitched five games with the Tampa Bay Devil Rays. He is more notable for having been a rodeo performer during his baseball career, not doing so under a fake name like Madison Bumgarner.

Undrafted out of college (he was 12-0 with a 2.01 as a senior and made the Baseball America NCAA Division II All-America team), Jason began his career in the Milwaukee Brewers system with the 1997 Helena Brewers, going 1-1 with a 3.31 ERA, two saves and 25 strikeouts in 16 1/3 innings and outperforming his brother, Matt. The dynamic brother duo remained intact with the Beloit Snappers, where Jason again was the top performer at 8-6 with a 1.92 ERA. He led the Midwest League in ERA but did not make the MWL All-Star team. In 1999, Jason only was 2-8 with a 3.56 ERA for the Stockton Ports, but struck out a batter per inning and had a 6.64 K/BB ratio. He also had a 1.38 ERA in three starts for the Ogden Raptors. Childers was rejoined by his brother in 2000 and again had the better season, striking out 177 in 157 1/3 innings and going 12-10 with a 3.49 ERA. The Mudville Nine pitcher tied Juan A. Pena for the California League lead in strikeouts and was 10th in ERA.

At age 26, Childers had a 7-6, 2.87 line for the Huntsville Stars, again a teammate of Matt's. Back in the bullpen in 2002, Jason was 1-1 with a 2.10 ERA for Huntsville and 2-3, 4.61 with the Indianapolis Indians while Matt made it to the majors despite again being outperformed by his brother. In 2003, the right-handed hurler had a fine year in AAA (5-4, 10 saves, 2.29) for the Indians but was not called up to Milwaukee. After starting the next year 1-0 with 15 saves and a 1.26 ERA with Indianapolis, he was dealt with Jason Belcher to the Montréal Expos for Peter Bergeron and Saul Rivera. Assigned to the Edmonton Trappers, he lost all three decisions, had a 4.50 ERA and saved five games. A minor league free agent after the year, Jason joined brother Matt in the Richmond Braves bullpen and again was the top performer of the two, with a 1-2, 16 saves, 2.09 year as the closer. Signing with the Tampa Bay Devil Rays, he made the team out of spring training and was 0-1 with a 4.70 ERA in five relief appearances before returning to the minors, where he went 2-3 with two saves and a 4.99 ERA for the Durham Bulls. He hung around in Triple A for three more seasons, finishing his career in the Mexican League in 2010.