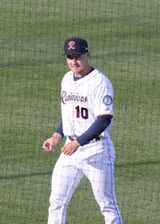 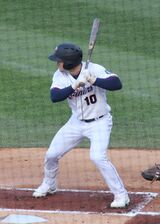 Outfielder Jarred Kelenic was the first high school player drafted in the 2018 amateur draft, with the 6th overall pick by the New York Mets. That made him one of the highest draftees ever from the state of Wisconsin. The five players who had been taken before him were all college players. Given the state's cold weather, he did not play high school baseball, but instead took advantage of the fact his family built an indoor training facility on their dairy farm, and played for the United States junior national team, including at the 2017 U-18 Baseball World Cup in Thunder Bay, ON. He hit .257/.386/.486 with 7 runs in the event as the US won Gold.

He quickly signed with the Mets and after being flown to New York, NY with his family to meet the media and team principals, he was assigned to the GCL Mets to begin his career. He hit .413 in 12 games there to earn a quick promotion to the Kingsport Mets of the Appalachian League where he hit .253 with 5 homers and 33 RBIs in 44 games. He did not stay long in the Mets' system, however, as on December 1t, he was one of three prospects acquired by the Seattle Mariners, along with Gerson Bautista and Justin Dunn, in return for 2B Robinson Cano and P Edwin Diaz. The Mariners also took on two problematic contracts in the deal, those of OF Jay Bruce and P Anthony Swarzak.

In February 2019, Kelenic made the news for a bizarre training video that he shared that involved him doing yoga with a goat (something which was apparently becoming a thing and was not just a personal quirk). He was named to the roster of the American League team for the 2019 Futures Game. He played for three different teams that season, starting in the South Atlantic League with the West Virginia Power, and then getting successive promotions to the Modesto Nuts of the California League and Arkansas Travelers of the Texas League, hitting AA just as he turned 20. Combined, he hit .291/.364/.540 in 117 games, with 31 doubles and 23 homers, scoring 80 runs and driving in 68. But he was then slowed down by the Coronavirus pandemic that wiped out the 2020 minor league season. He was limited to intra-squad games at the Mariners' alternate training facility as the team did not call him up to at least give him a brief exposure to the Show. It turns out that there was some cost thinking behind that, as the following spring a Mariners' executive was caught saying that the team was deliberately slowing down the progress of some of its top prospects in order to delay their eligibility for arbitration, a practice long suspected of being applied but always denied by the teams. In this case, it cost the executive his job, and put some pressure on the team brass to have him start the 2021 season at the major league level, especially as he was tearing up the Cactus League. But, the Mariners did not feel the need to have Kelenic start the year in Seattle in spite of the public shaming as he was reassigned to the minor league camp on March 26th; it was clearly not a result of not performing on the field, as he was hitting .333 with an OPS of 1.256. He was assigned to the AAA Tacoma Rainiers when the minor league season finally began in May, and opened his account by homering twice in his first game on May 6th.

The highly-anticipated call-up to the major leagues took place on May 13, 2021. Interestingly, the Mariners decided to have another of their top prospects, P Logan Gilbert, who was selected 8 slots after Kelenic in the 2018 draft, to also make his debut that day, perhaps to dilute the pressure on each of them. In any case, writers immediately pointed out that this decision would make the date a watershed in team history. Their first game was dominated by the opposition, though, as the Cleveland Indians' Zach Plesac took a no-hitter into the 8th inning on his way to a 4-2 win, while Jarred went 0 for 4, being the victim of a great catch by RF Josh Naylor in his first career at-bat as his team's lead-off hitter in the 1st inning. In his second game played the next day, however, his superior hitting talent was on display as his first major league hit was a long homer off Aaron Civale and he went 3 for 4, his other two hits being doubles, scored twice and drove in three runs in a 7-3 win over the Indians. That was a lone highlight, however, as he was in the starting line-up when Spencer Turnbull of the Detroit Tigers no-hit the Mariners on May 18th, and later that month he started a brutal 0-for-44 skein during which he struck out 17 times. The Mariners figured he wasn't quite yet ready for a full-time job in the Show and sent him back to Tacoma on June 7th with his batting average at .096 and his OBP and slugging both below .200. He found his hitting stroke again in Tacoma and was named to represent the American League in the 2021 Futures Game. After appearing in the game, he was promoted back to Seattle for the start of the second half, having hit for an OPS of 1.008 since his sent down, the second highest figure in the minor leagues over that period (Luis Campusano, who also played in the Futures Game, hit 1.025). On September 17th, he had his first two-homer games for the Mariners; the only players in franchise history to have done so at such a young age were two legends: Alex Rodriguez and Ken Griffey Jr.