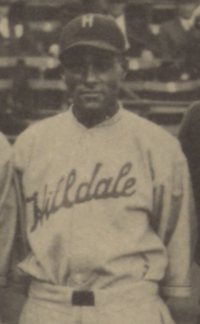 Jake Stephens was a Negro League infielder for 17 years, noted for his glovework, speed and personality. He was known for his range, acrobatic abilities and arm at shortstop. Stephens was born only three days after another long-time Negro League shortstop, Bill Riggins. He was the brother of Frank Stephens.

Stephens got his start in blackball by subterfuge, sending a telegram to Ed Bolden about a great young prospect in York, Pennsylvania, not mentioning that the sender was the prospect in question. Bolden signed him for the 1921 Hilldales and he hit .263 against all levels of competition and returned to semipro ball. He spent part of 1922 in semipro ball and some with Hilldale, batting .290 against all levels. In 1923, Stephens saw more time, backing up Pop Lloyd at shortstop and Judy Johnson at third base and hitting .209 against all levels, though only batting an anemic .100 (4 for 40) against ECL pitching.

In 1924, the youngster hit .183 (19 for 104) as a reserve shortstop. Stephens made an error in one game pitched by Nip Winters that cost Winters a perfect game. Jake sat out the 1924 Negro World Series; John Holway listed the reason as "a case of nerves", and James Riley echoed Holway, while Larry Lester cited an ankle injury incurred before the series as the cause. As it was, Stephens only played three innings defensively (in game seven) in the series.

With Stephens out of the lineup, Judy Johnson moved from third to shortstop, while Biz Mackey moved from catcher to third, and Louis Santop, a better hitter than Stephens but a lesser defensive catcher than Mackey, covered that position, splitting time there with Joe Lewis. Game eight was not a good one for this defensive arrangement, as Bullet Rogan reached on an infield hit to Mackey, and Dobie Moore reached on a bad-hop single past Johnson. Santop then dropped a pop-up from Frank Duncan and Duncan then got one past Mackey to win it.

Stephens moved to shortstop in 1925 with Mackey catching and Johnson (who had been playing short at times) becoming ensconced at third base. Country Jake hit .241 and went 5 for 20 in the 1925 Negro World Series as Hilldale won the title this time.

Stephens slipped to .220 in 1926. In 1927, he was down to .154 at the heart of a hitter's era. Stephens was 14 for 56 with 18 total bases in 14 games in the 1927-1928 California Winter League. He sent a fake telegram to himself saying that his father died so he could return home and avoid all the curveballs he was having trouble with. James Riley says he did the same thing during the Cuban Winter League one year; the 1/5/1929 Pittsburgh Courier listed Stephens as returning from Cuba due to flu.

Stephens was traded with Rev Cannady to the Homestead Grays for George Britt and Martin Dihigo. He jumped the Grays in August of 1929 to go back to Hilldale but was with Homestead for the postseason, during which he was 0 for 12 against the Chicago American Giants.

Stephens batted .237 for Homestead in 1932 and .136 for the Pittsburgh Crawfords. He did finish fifth in the East-West League in stolen bases (5). Against white major leaguers, he had a fine exhibition campaign, going 8 for 18. He moved to the Philadelphia Stars in 1933 and batted .321 while manning second base because Lloyd was at short.

In 1934, Jake hit .256 for Philadelphia, moving back to shortstop and forming an excellent double play combination with Dick Seay at second base. He was 1 for 6 in the postseason against Chicago.

Stephens batted .255 in 1935. He played in the 1935 East-West Game, starting at shortstop for the East and batting leadoff in a 11-8 loss. He was 2 for 6 with a run, RBI and an error. His RBI put the East ahead 8-4 in the 10th but the West managed to rally against Luis Tiant Sr. and Martin Dihigo. After the game, Stephens spent the night on the town and did not get back to his hotel room until 2 AM. He was rooming with long-time roommate Jud Wilson, who was not in the mood for it and promptly dangled the much smaller Stephens out of the hotel window by the leg.

Another noted (undated) incident involving Stephens and Wilson is when Stephens was arguing with an umpire. Wilson tried to intervene and got in between the two. Stephens reached around Jud and punched the ump, who thought Wilson had dealt the blow and ejected him.

Stephens was known for asserting his views both physically and verbally. He once called Satchel Paige "the most overrated player ever G-d put breath into."

Jake moved to the New York Black Yankees and hit .169 in 1936 and .222 in 1937. He got an offer from the Atlanta Black Crackers but decided to stay in New York and retire from baseball.

Stephens ran a taproom for two years after baseball. He then was with the Pennsylvania Bureau of Motor Vehicles from 1939-1955 and also worked as a part-time deputy sheriff.