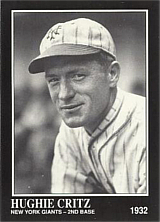 “Such stars as Johnny Evers and Eddie Collins had set the fashion and brains and second base sort of went together... So I decided to appear smart, too. I shifted to the right for this batter, to the left for that one, guessed wrong half the time but got away with it.” - Hughie Critz, to John Drebinger, May 26, 1930

Critz spent parts of four seasons in the minors, from 1921 and 1924, batting .326 in 628 at bats for the Minneapolis Millers in 1923. When he started the following season similarly hot (.328 in 35 games), the Millers sold him to Cincinnati. He started spectacularly, going 2-for-4 against Hall of Famer Grover Cleveland Alexander of the Chicago Cubs en route to a .322/.352/.448 line with 32 extra base hits in 102 games. His batting line would never shine so bright again.

His glove, on the other hand, proved more than adequate enough to keep him around for the next decade. In 1925, he crafted a 2.5 dWAR, one of three times he would lead National League second baseman in such value. In 1926, he established career highs 41 extra-base hits and 79 RBI while scoring 96 times and establishing a big league record with 588 assists at second base. Additionally, he led the league in double plays and fielding percentage as the Reds were locked in a dogfight with the St. Louis Cardinals for the NL crown, falling just two games off the pace. At season's end, Hughie finished runner up to Cardinals catcher Bob O'Farrell in the MVP vote.

Hughie seemed to have a penchant for strong even-numbered years. His performance slipped in 1927 while only playing 113 games but he turned things around again in 1928 with a .296/.335/.387 line, 95 runs scored and 37 extra base hits to go with 18 steals. He crashed again in 1929, in large part due to a collision at second base with a speeding train that called himself Riggs Stephenson. He was not much of a sparkplug for Cincy in 1930 either when, on May 24, the New York Giants picked him up for Larry Benton. The key to the trade was the termination of Jack Hendricks as Reds manager; John McGraw had sought Critz's services for years but Hendricks, among many other figures in the game, detested McGraw.

Now surrounded by Hall of Famers around the infield (Bill Terry, Travis Jackson and Freddie Lindstrom manned the other positions), all Hughie had to do was make the plays. He became a key cog in the Giant infield immediately, scoring 93 runs to form a career high 108 for the 1930 season. Thanks to being traded, Critz played 88 home games that season, believed to be a single-season record (Cotton Tierney apparently holds the road record of 92 games). An injury to his throwing shoulder limited him in another odd numbered year, 1931, then it was back to productivity in 1932. In his best year as a Giant with the bat, he hit .276/.313/.355 and led the NL in at bats. His batting line was nothing to write home about in 1933 but his glove was. He heated up at the plate simultaneous with the Giants pennant push, batting .345 down the stretch. The Giants toppled the Washington Senators in five games to earn Critz his lone World Series ring; though he batted but 3-for-22, he fielded flawlessly. He enjoyed one more fine year defensively in 1934, then retired at the end of the 1935 season.