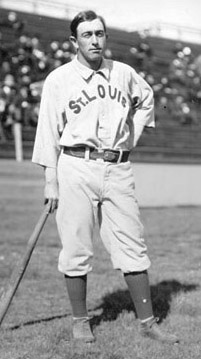 Homer (Doc) Smoot was the eldest of three children. He was born to Luke Smoot and Rebecca Wheatley-Smoot. He attended elementary school with Geneva Gordy, who would become his wife in 1901. He attended prep school at Wesley Collegiate Academy in Dover, DE.

He and his wife Geneva would have a total of five children - two boys and three girls.

Smoot attended Washington College in Chestertown, MD, where he played both football and baseball. While playing college baseball, he also played semi-professional baseball for multiple teams.

He signed his first professional contract in 1900, with the Allentown Peanuts of the Atlantic League. After the Atlantic League folded shortly after his signing, he signed with the Worcester Farmers of the Eastern League. He played the rest of the season with the Farmers, except for a ten-day period in which he played for the Providence Clamdiggers.

He again played for Worcester in 1901, hitting .356. Following that season, he was signed by the St. Louis Cardinals. He made his big league debut on April 17, 1902 at the age of 24. Smoot and teammate George Barclay were the team's top home run hitters in 1902, hitting three each, combining for six of the team's 10 home runs; he tied for 5th in the league in circuit clouts. According to the Society for American Baseball Research, Smoot was the best rookie in 1902. Smoot is also one of the few players to hit two inside-the-park home runs in a single game, which he did on April 25. He hit .311/.350/.380 and was 10th in the 1902 NL in slugging percentage.

1906 saw Smoot's career take a rapid turn for the worst. He started the season with the Cardinals, hitting only .248/.289/.332 with them. That prompted a midseason trade with the Reds, who sent Shad Barry in return for Smoot. Although his average rose while with the Reds-he hit .259/.315/.318 with them-that could not save his season or his career. After hitting only .252 combined that season, his Major League career was over. He played his final big league game on October 7, 1906. After the 1906 season, his contract was sold to the Toledo Mud Hens of the American Association.

Multiple explanations have been posed to explain the quick decline in production and from Smoot, and the quick end to his career. One claim is his eyesight became poor, although his obituary says his eyesight remained "undimmed". His obituary says he was slowed by muscular rheumatism. Luck may have also played a factor, and Smoot was just unlucky and didn't get the chance to play in the Majors again.

He started 1911 with the Blues, hitting .379 with them before his contract was sold to the Wilkes-Barre Barons of the New York State League. He won his only pro pennant in 1911.

He was an assistant manager and weekend player in 1912 for Wilkes-Barre, but the rheumatism got so bad he had to call his playing days quits.

After his playing days, he became head coach at Washington College for a year. He spent 10 years as a chicken farmer and operating a feed business before getting the chance to be involved in professional sports again. In 1925, he was manager of the Salisbury Indians of the Eastern Shore League. After only one year there, he returned to his feed business.

His son, Roger Smoot, signed a professional contract with the Cardinals in 1927, but never played for them. He died on March 25, 1928 from spinal meningitis at the age of 50. He was inducted into Washington College's Athletic Hall of Fame in 1992.

Overall, he spent four seasons with teammate Chappie McFarland, longer than any other teammate. Smoot, the only player ever to have at least 500 at-bats every season while playing in as many as five seasons, compares most statistically to Jigger Statz through 2006 using the similarity scores method.