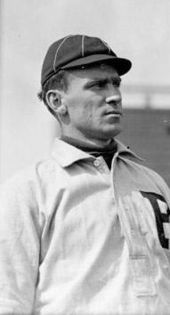 "[Shad] Barry has seen considerable service on the diamond. He is considered one of the best utility players in the game. He works in any position, is a clever hitter and fine fielder." - description on the back of Shad's 1909-11 Obak T212 baseball card

Shad Barry played a lot of positions for a lot of teams in his ten-year major league career. He was on seven teams and played at least 37 games at each of the infield and outfield positions. He is one of two major leaguers remembered with the first name "Shad"; the other, Shad Williams, was actually named Shad while Barry's real first name was John.

Barry was at Niagara University from 1896-99 (along with several other future major leaguers) but he was already playing professional baseball beginning in 1896 with Rochester, where he was a teammate of Gus Weyhing. He played in the Eastern League in 1896-98, making his major league debut on May 30, 1899. He was a player-manager at Seattle in 1912.