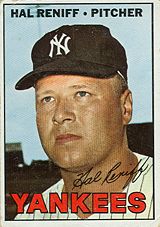 He returned to the minors with the Syracuse Chiefs of the International League from 1968 to 1972, ending his baseball career at age 34.

After baseball, he did a little acting among other things. He had blond hair and blue eyes. He died at age 66 in Ontario, CA on September 7, 2004.

"Bad weather forced the Yankees to turn an off-day into a game without much warning. The official attendance was 413. And when it was over, Hal Reniff, the relief pitcher, asked Jim Bouton if he brought his station wagon to the players' parking lot. The answer was a bewildered 'Yeah,' and Reniff shot back, 'Good. Because the crowd needs a ride home.' - Sportswriter Vic Ziegel in the Daily News (September 10, 2004)

Reniff was related to a number of professional ballplayers. The currently known list is:

For a more complete story, see The Joe Harris Family by Bob Harris