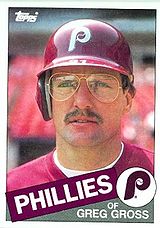 "The cycle that baseball was in back then, with the AstroTurf and everything, centered on the stolen base or the home run, and I did neither of those. It was just a matter of survival. You made the best out of it. The big break for me was when I got onto a real good club." - Gross, to Harrisburg, PA's The Patriot-News in April 2007

Greg Gross played 17 seasons in the majors, all in the National League and mostly with the Philadelphia Phillies, and is best remembered as a successful pinch-hitter. More recently, he was a member of the Phillies coaching staff.

Selected by the Houston Astros in the 4th round of the 1970 amateur draft, Gross made his pro debut that summer with the Covington Astros, hitting .351 in 54 games. After leading the American Association with 174 hits with the Denver Bears in 1973, he reached the majors in September. Although he was a center fielder in the minors, he became Houston's regular in right in 1974 because Cesar Cedeno was in center. He went on to hit .314 as a rookie (third in the NL) but was thrown out trying to steal 20 times. He was named Rookie of the Year by The Sporting News and finished second to Bake McBride in BBWAA Rookie of the Year voting.

After three years as a regular for the Astros, Gross was traded to the Chicago Cubs for Julio Gonzalez following the 1976 season. Nearly four years into his big league career, he finally hit his first home run on July 6, 1977, clubbing a three-run shot off Don Stanhouse of the Montreal Expos. He ended that summer with a career-high 5 homers. Following two seasons with the Cubs, he was dealt to the Philadelphia Phillies as part of an eight-player trade prior to the 1979 season.

Primarily a backup outfielder and pinch-hitter with the Phillies, Gross was a member of the club for a decade, playing on the 1980 World Series champions and 1983 National League pennant winners. He also took to the mound for Philadelphia in a June 8, 1986 game against the Expos, giving up one hit and one walk while striking out two (Casey Candaele and Herm Winningham). He signed with the Astros in 1989, getting into 60 games (including one as a pitcher) in his final pro season.

Following his playing days, Gross was a high school baseball coach at Malvern Preparatory School for three years. He then joined the Colorado Rockies organization as a member of the New Haven Ravens coaching staff in 1995 and 1996 and was a minor league hitting instructor for them the next four years. He rejoined the Phillies as bench coach on Larry Bowa's staff in 2001 and was then the club's hitting coach from 2002 to 2004. He returned to the minors for several seasons as a coach for the Batavia Muckdogs (2005), Clearwater Threshers (2006), Reading Phillies (2007), and Lehigh Valley IronPigs (2008-2010). From July 2010 through the 2012 season, he was again Philadelphia's hitting coach. The Phillies fired Gross on October 4, 2012, along with fellow coaches Pete Mackanin and Sam Perlozzo. Gross was hitting coach of the Reno Aces in 2013-2017. When Jerry Narron was named interim bench coach for the Arizona Diamondbacks, Gross was named interim manager and remained in place for the entire season. After 2 seasons as manager he moved back to a coaching role with Reno in 2019, and was scheduled to return in 2020 before the season was cancelled due to Covid-19.