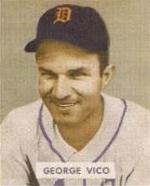 Signed by scout Marty Krug of the Detroit Tigers as an amateur free agent in 1941 and broke into Organized Baseball that year at age 17 with the Fulton Tigers in the Kitty League and hit .322 and also played that year for the Muskegon Reds in the Michigan State League (1941) (.111 in limited time). He then moved on to the Winston-Salem Twins in the Piedmont League the next year and batted .230 with 4 home runs. He went in the Navy and was stationed at the San Diego Naval Training Center as a physical instructor and played on the baseball team. He was discharged in 1945 (TSN 8/10/44, 11/15/45, 4/14/48).

On January 20, 1951, he was traded by Detroit with Marv Grissom to the Seattle Rainiers for Wayne McLeland.

He had black hair and brown eyes, his ancestry was Serbian and his principal hobby was photography. He died at age 70 on January 14, 1994 at Redondo Beach, CA and is buried at United Serbian Cemetery in East Los Angeles, CA.