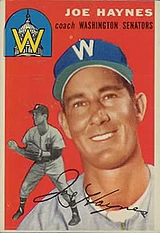 Righthander Joe Haynes was signed by the Washington Senators as an amateur free agent before the 1937 season. The 6' 2½" pitcher was assigned to the Jacksonville Tars of the South Atlantic League for his first and next-to-last year in the minors and went 11-11 with a 3.43 ERA. 1938 saw him heat up in the class B Piedmont League with the Charlotte Hornets, winning 18 and losing 9 with a 3.23 ERA and pitching 237 innings. He was never to pitch another minor league game.

The big righthander was with the Washington Senators and the Chicago White Sox from 1939 through 1952. Haynes was married in 1941 to Thelma Griffith, the daughter of Washington team owner Clark Griffith. Haynes, who had been sold to the White Sox prior to the marriage, led the American League in appearances with 40 in 1942, while winning 8 and losing 5, with a 2.62 ERA.

Used as both a starter and in relief, he was 17-13 the next three years (1943-1945) and was just 7-9 in 1946, but four of his wins came against Bob Feller and the Cleveland Indians. The winner of a career-high 14 games in 1947, also leading the league in ERA at 2.42, he fell to 9-10 in 1948 but was chosen for the 1948 All-Star team. However, on November 22nd, the White Sox traded Haynes to the Indians for Joe Tipton. The Indians then traded him, along with Ed Klieman and Eddie Robinson, to the Senators for Mickey Vernon and Early Wynn.

Haynes returned to the Senators in 1949, but did not have a lot of success, and closed out his active playing career in 1952 with a 76-82 record and a 4.01 ERA, after 14 consecutive seasons in the major leagues. After three seasons as a coach for the Senators, he became the team's vice-president and general manager in 1955, following the death of his father-in-law.

Haynes was with the team as an executive vice president through the franchise shift to Minnesota and until his death on January 6, 1967, at age 49. He suffered a heart attack while shoveling snow in his suburban Minneapolis home at Hopkins, MN.