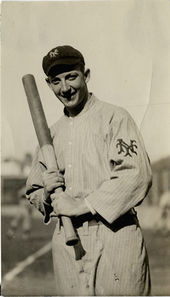 On March 17, 1921, he was ordered to appear before Commissioner Landis regarding alleged gambling, but he decided to retire from Organized Ball instead. He signed with a Massillon, OH semipro team. On March 21st Paulette was barred from organized baseball for life for by Landis for accepting gifts from gamblers. (NLM)