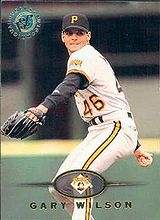 Pitcher Gary Wilson was selected by the Pittsburgh Pirates in the 18th round of the 1992 amateur draft and made his pro debut that summer. In 1994, he had his finest season, going 11-6 with a 2.52 ERA in 28 games, split between the Class-A Salem Buccaneers and the AA Carolina Mudcats.

Wilson reached the majors with the Pirates on April 28, 1995 giving up two runs (including a Jim Eisenreich home run) in one inning of relief work. He earned his only big league decision, a loss, against the San Francisco Giants on May 13th. Overall, in ten appearances with the club, all in relief, he was 0-1 with a 5.02 ERA. He played three more years in the minors but never again reached the big leagues.