Note: This page links to Hall of Fame outfielder Earl Averill. For his son who played from 1956 to 1963, click here. 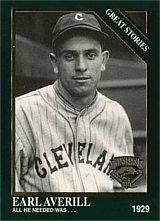 "There's no set way to get a man out of a slump. Very often those slumps are mental. A fellow gets it into his head that he's not going to hit the ball, so he doesn't. Once Earl Averill was having some tough going, which was unusual for him. Somebody gave me a bat that was a little burned. I brought it over to Averill and said 'Look, Earl. See what I have here. I want you to try this bat out. But just once. I can't take a chance on you breaking it; otherwise, we'll both be in the soup. And for heaven's sake, don't tell any of the other boys about it.' So he goes up to the plate with the bat and whack! A line shot for a base hit. He came back all smiles. You know, that snapped him out of it and he started hitting like mad. It was just an ordinary bat that somebody had put in an oven and burned a little. No different from any other bat, except that Earl thought it was different. That slump had become a mental thing with him, and all he needed to break out of it was some oddball notion." - Roger Peckinpaugh, from The Man In The Dugout by Donald Honig

Hall of Fame outfielder Earl Averill played a decade for the Cleveland Indians and is the team's all-time leader in several offensive categories. He finished in the top five in MVP voting three times while being named to the first six All-Star Games.

A native of Washington, Earl began his pro career with the San Francisco Seals of the Pacific Coast League from 1926 to 1928. After hitting .354 with 36 home runs in 1928, his contract was purchased by the Indians for just $50,000. Breaking into the majors a month before his 27th birthday, he homered in his first big league at-bat on April 16th, 1929, facing Earl Whitehill of the Detroit Tigers. As Cleveland's regular center fielder, he hit .332 with 18 homers in his rookie campaign. In his sophomore season, Averill raised his average to .339 and hit 19 home runs, including four in a doubleheader against the Washington Senators on September 17th.

In each of the next two seasons, he clubbed 32 homers and finished fourth in American League Most Valuable Player voting. He went on to be the only outfielder selected to the first six All-Star Games, from 1933 to 1938, and put together perhaps his finest season in 1936, hitting .378 with 28 home runs and 126 RBI while leading the AL with 232 hits and 15 triples. In 1937, Averill began to be slowed by a back injury, and he was traded to the Detroit Tigers for Harry Eisenstat in the middle of the 1939 season. He saw limited time playing time with the Tigers but saw the only postseason action of his career in 1940. In the World Series, the 38-year-old Averill went 0-for-3 in three pinch-hit attempts as Detroit fell to the Cincinnati Reds in seven games. He moved on to the Boston Braves in 1941 but was released in late April after going just 2-for-17. He finished his pro career that summer with the Seattle Rainiers of the PCL.

Despite having a relatively short career, Averill still finished his career with over 2,000 base hits. As a center fielder, Averill ranks around #30 all-time in both WAR and WAR7 as of June 2019 [[1]], higher than fellow center field Hall of Famers Edd Roush, Earle Combs and Hack Wilson, and close to Kirby Puckett, whose career was similarly short. He remains the all-time Indians leader in total bases, runs batted in, runs scored and triples. He also remains 3rd in all-time Indian hits and doubles, and 4th in all-time Indian home runs and walks. He was elected to the Baseball Hall of Fame on February 3, 1975 by the Committee on Baseball Veterans.

Following his baseball days, Averill returned to his Washington hometown where he owned and operated a motel for twenty years. He died of pneumonia at age 81. His son, Earl Douglas Averill, played in the majors from 1956 until 1963. Earl Jr. was mainly a catcher but also played left field and a few games at third, second, and first. Bob Feller played with both Earl Averills with the Indians. Another son, Bernie, played baseball for the Oregon Ducks in the mid 1950s.

Some or all content from this article is licensed under the GNU Free Documentation License. It uses material from the Wikipedia article "Earl Averill".