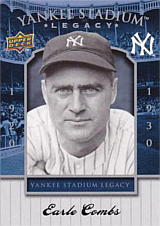 Inducted into Hall of Fame in 1970

"I thought the Hall of Fame was for superstars, not just average players like me." - Earle Combs

"If a vote were taken of the sportswriters as to who their favorite ballplayer on the Yankees would be, Combs would have been their choice." - Fred Lieb

Known for his speed, center fielder Earle Combs (whose last name rhymes with "tombs") was the New York Yankees leadoff man in the days of Babe Ruth and Lou Gehrig. He hit .325 over the course of his career, playing twelve seasons with the Yanks.

Baseball was not originally in the cards for Earle. He attended Eastern Kentucky State Normal School with every intention of being a schoolteacher. He took their two-year teaching program, batting .591 as a member of the school's baseball team. Upon graduation, he returned home and taught in one-room schoolhouses while continuing to play semipro ball. Playing with the Lexington Reos in 1922 of the semipro Bluegrass League, he drew the eye of the Louisville Colonels in the American Association, giving up a life of teaching for a life of baseball. He hit .344 in his first season, then batted .380 in 1923, attracting a bidding war from the big leagues. The New York Yankees were the winners, seizing him for $50,000.

In 1930, Earle was back in fine form when he hit .344/.424/.523 with 129 runs scored and another triples crown (22). He scored a career best 143 runs with a .321/.405/.455 line in 1932, then fell off slightly to .300/.372/.465 in limited action in 1933. Combs suffered a serious injury in 1934 that could have cost him his life, fracturing his skull, breaking his shoulder and damaging his knee after running into the wall at Sportsman's Park on a sweltering summer day in St. Louis. He was carried unconscious from the field and remained in the hospital for two months afterwards, but miraculously returned to the field in 1935. His career was shortly thereafter ended by another injury, a broken collarbone. He was replaced the next season as the Yankees center fielder by another future Hall of Famer, Joe DiMaggio.

Although he was a very good player, Combs was famous for his weak throwing arm. In addition, although he had a .325/.397/.462 batting line, he never was in the top five in batting average during any one season. His numbers were still considered strong enough by the Veterans Committee to induct him into the Hall of Fame in 1970.