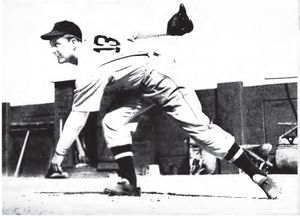 In the final game of the 1938 season, pitcher Harry Eisenstat of the Detroit Tigers took a no-hitter into the 8th inning en route to defeating the Cleveland Indians 4-1. The game's losing pitcher was Bob Feller, who struck out 18.