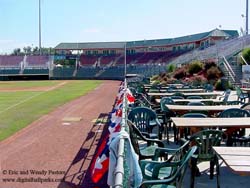 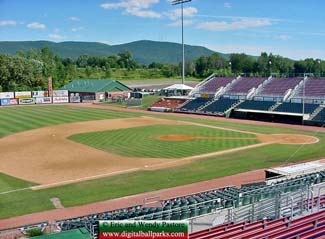 Dutchess Stadium in Wappingers Falls, NY, is the home of the Hudson Valley Renegades, the New York Yankees' High-A East farm team. Despite its Wappingers Falls street address, "The Dutch" is closer to Fishkill, NY, than to the Falls - less than a mile from the Hudson River - and features a view of the Adirondack Mountains behind the outfield fence.

The Dutch is located off a side road that runs north from Beacon, NY to Wappingers Falls, just north of I-84, in a largely wooded area. The main road between the two towns goes through Fishkill, which is east of the ballpark.

The name "Dutchess" refers to Dutchess County, NY, in which the ballpark is located.

The 'Gade lease runs through 2046. Built in 71 days for the relocated Erie Sailors, its gates opened literally as the last seats were bolted into place for their second home game. Because it wasn't ready for the first, the Hudson Valley Renegades debuted at Wahconah Park in Pittsfield, MA, on June 17, 1994 - news you may have missed amid coverage of a white Ford Bronco on the L.A. Freeway.