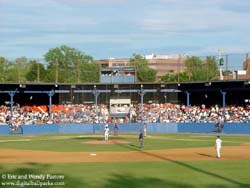 Wahconah Park in Pittsfield, MA, was the home of Pittsfield affiliated baseball from 1919 through 2001. After that, the Pittsfield Astros of the New York-Pennsylvania League moved to Troy, NY, where they became the Hudson Valley Renegades.

Baseball on this land dates to 1892, including professional ball as early as 1905. Decades before, in Pittsfield but not at this site, the first intercollegiate baseball game ever was played: July 1, 1859, with Amherst College whipping Williams College, 73-32.

Wahconah's wooden grandstand went up in 1919, renovated into its current size and look during the 1949-1950 off-season. Until the P-Astros left, it was one of just two affiliated ballparks in which batters faced the setting sun. The California League's 2016 contraction of the Bakersfield Blaze took that number to zero. The original Wahconah and Bakersfield's Sam Lynn Ballpark were built before lights made sunsets a game issue.

On June 17, 1994, the home of the then-Pittsfield Mets hosted another pro game - pinch-hitting for the not-quite-completed Dutchess Stadium near Wappingers Falls, NY. Seven years later, Ball Four author Jim Bouton led a drive to save the historic playpen. He chronicled the fight in another book, Foul Ball: My Life and Hard Times Trying to Save an Old Ballpark (2003). The campaign was extremely frustrating but ultimately successful: the ballpark was saved and Pittsfield hosted a series of teams in independent leagues from 2002 to 2011, the last of these being the Pittsfield Colonials of the Can-Am Association. Since then, it has hosted mostly summer collegiate baseball teams.

A 2004 "vintage" game - promoted by Bouton - clearly drew Wahconah's largest crowd ever. No official attendance seems to be available, but various sources say between 5,000 and 6,000 fans were there. The ballpark was added to the National Register of Historic Places in 2005.

At least the grandstand is again in trouble. Results of a safety study conducted in late 2021 led to a decision to shut it down for the 2022 season, but the city said it would repair and renovate it - and in the meantime created additional seating.[1] However, in a June 23rd radio interview, Pittsfield Mayor Linda Tyler said, "I want to see that entire structure bulldozed and something new built."[2] Estimates to replace or renovate run about $10 million; Congress included $3 million in the omnibus spending bill it passed on December 23, 2022. Whatever results should have a design by 2024 and opened by the summer of 2025.[3]

Wahconah, whose stated capacity is 4,000, was previously renovated to varying degrees many times besides the mid-century grandstand rebuild: 1927, 1931, 1946, 1976 and 1989. Except for the Pittsfield Electrics' 1941 season at Deming Field, no Pittsfield team has used another stadium as its primary home.