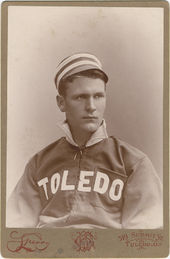 "Cincinnati is negotiating a trade of 'Dusty' Miller for Sockalexis." - Sporting Life of July 31, 1897

"No one believes here that 'Dusty' Miller will wear a Cincinnati uniform next season." - Sporting Life of November 13, 1897

"Saturday the city was startled by a well-defined story that 'Dusty Miller' had been swapped to Philadelphia for Big Sam Thompson. . . Ewing and Bancroft had been talking of such a trade . . . as stories go it was magnified into a bona fide trade." - Sporting Life issue of January 29, 1898

Dusty Miller was the first major leaguer to come from Niagara University. Most of his major league at-bats were with the Cincinnati Reds from 1895 to 1899. He was the regular right fielder for the Reds in 1899 for most of the season, but was apparently gone before 19-year-old Sam Crawford came up with the team.

During his time in the majors he seemed to constantly be the subject of trade rumors.

In 1897 it was reported that Miller and Jesse Burkett had had a "run in" during a game a couple years earlier, and had not talked to each other since then, but had now made up.

In the summer of 1906 it was reported that he was running a saloon in Memphis.

"Hoy and 'Dusty' Miller are Cincinnati's crack run-getters." - from Sporting Life of June 6, 1896