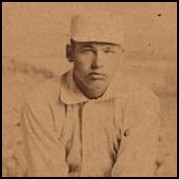 Hoy lost his hearing and ability to speak as a result of childhood meningitis. He went on to attend the Ohio State School for the Deaf as did Major Leaguer Ed Dundon of the Columbus Buckeyes in the American Association. After operating a shoe repair business in his Ohio hometown for a time, he began his pro baseball career in 1886 and made his big league debut two years later with the Washington Nationals in 1888. Due to his handicap, he was often called by the derogatory nickname "Dummy" Taylor.

A career .287, Hoy's greatest asset was his speed on the basepaths. He led the National League in stolen bases in 1888 and scored 1426 runs over the course of his career. Due to his small stature (he stood only 5' 4"), he was also difficult to strike out; he walked 1004 times in his career.

Historians dispute the role Hoy may have played a role in the development of umpires' use of hand signs when making calls. According to legend, he objected that his deafness made it impossible for him to hear the verbal calls of umpires and requested that the umpires use gestures as well. Allegedly, the signals were also well received by fans and became a permanent part of umpiring. However, there is evidence that the use of hand signals was developed independently (see talk page for more on this).

Hoy also played in the minors, beginning at age 24 with Oshkosh. At age 41, he played in all 212 of the games of the Los Angeles Angels in 1903. The source milb.com says he became wealthy after he retired from baseball.

Hoy died in 1961, just five months shy of his 100th birthday. At the time of his death, he was the oldest living MLB player. He was also the last surviving player of the Players League and the old Major League American Association.

Hoy was the first person to hit a grand slam in American League history.