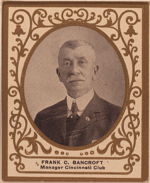 Frank Bancroft managed major league teams in nine seasons. He was perhaps the first American to head a baseball tour of Cuba, visiting there on December 21, 1879 with a club called the Hop Bitters, which beat a local squad. He was "business manager" for the Cincinnati Reds for 30 years, getting some credit for inventing "Opening Day" as a special event deserving of special hoopla.

Bancroft was born in 1846. He never played major league baseball, although one source calls him an early "legendary player" [citation needed]. He would have been 25 when the National Association was formed in 1871. A second source claims he got his start organizing military games during the Civil War. A third source claims he got his start in professional baseball in 1878 when he managed the minor-league New Bedford, MA team in 1878. The source says he had run what became the "Bancroft House" in New Bedford starting in 1876, and also opened a roller rink in 1884 in the town. The team had a record of 83-44 in 1878 with the lowest payroll in the league.

He managed seven different teams in his nine years in the majors. Only twice did he manage more than a single season. He started with the 1880 Worcester Ruby Legs, who he managed the whole season to a record of 40-43. Even though the home field was a strong hitters' park, the pitching staff had a staff ERA of 2.27.

In 1881 and 1882 he managed the Detroit Wolverines the whole season each year. Both teams played roughly .500 ball. Several of his Worcester players came over to Detroit.

In 1886 he managed Rochester Maroons in the International Association.

In each of 1887, 1889, and 1902, Bancroft managed part of a season. In 1910 he managed a team of mostly major league players called the "All Nationals" in exhibition games after the regular season.