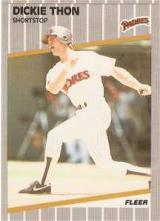 Shortstop Dickie Thon of the Houston Astros was an up-and-coming star for the Houston Astros in the early 1980s, leading the National League in triples in 1982, and hitting 20 homers while making the All-Star team in 1983. However, early in the 1984 season, he was struck in the eye by a pitch thrown by Mike Torrez of the New York Mets. He suffered permanent damage and missed the remainder of the year. Over the next four seasons, Thon played rather sparingly before finally becoming a regular starter again with the Philadelphia Phillies in 1989.

Thon twice stole over 30 bases in a season. In 1982 he had 37 steals while getting caught only 8 times. Thon, while appearing in post-season play three times, never played in a World Series.

He broke into the majors hitting .339 with the California Angels in 1979; the Angels won a division title that year.

Dickie played for the Bayamón Cowboys, San Juan Metros, San Juan Senators, Arecibo Wolves and Santurce Crabbers in the Puerto Rican Winter Baseball League. He was one of the most productive batters of the league during the early 1980s. While born in the United States, he was of Puerto Rican origin and grew up on the island.