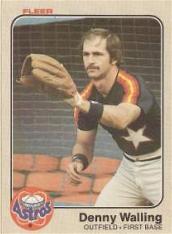 Utility man Denny Walling played 18 seasons in the big leagues, including more than a decade with the Houston Astros, but never had as many as 400 at-bats in one season. He played roughly equal amounts of third base, outfield, and first base. He also was known as one of the game's top pinch hitters, recording 108 pinch hits during his career.

He was on Team USA when they won the 1975 Intercontinental Cup and was in the majors by the end of the year.

One of the highlights of Walling's career was hitting the game-winning home run against the San Francisco Giants on September 25, 1986, in the contest that clinched the NL West title. However, his performance in that game was overshadowed by teammate Mike Scott, who hurled a no-hitter to earn the win.

The similarity scores method does not do a good job of finding comparisons to Walling because of the unusual shape of his career. Most of the comps are of players with much shorter careers but similar total stats.

Following his playing days, Walling was a member of the Oakland Athletics coaching staff from 1996 to 1998 and the hitting coach of the New York Mets in 2003 and 2004, under skipper and former Astros teammate Art Howe with both clubs. From 2007 to 2011, he was a roving minor league hitting instructor for the Baltimore Orioles. In 2012-2014, he was the hitting coach for the AAA Norfolk Tides of the International League.

Denny played for the Bayamón Cowboys of the Puerto Rico Winter Baseball League. His brother, Gregory Walling, was a minor league outfielder in 1967.