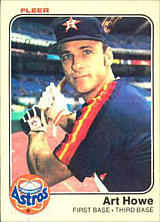 Art Howe played 11 seasons in the majors and then managed for 14 years. Howe, Greg Brock, and Jeff Huson are the only major leaguers appearing in more than 100 games to come from the University of Wyoming.

It was a very inauspicious start, but Howe's career was just beginning. He became a regular for the next six years with the Astros, always appearing in 100 to 125 games. In the first three years, he played primarily second base, then in the fourth year he was a first baseman, and in the last two years he was a third baseman. His hitting was better than might have been expected. Although Houston played in an extreme pitcher's park, Howe hit over .290 twice and over .280 another time. He also drew a decent number of walks, and showed moderate power.

After not playing in 1983, Howe played sparingly with the St. Louis Cardinals in 1984 and was released early in the 1985 season.

Over the course of his career, he appeared in the postseason three times, but never in a World Series. Based on similarity scores, a similar player was his contemporary Randy Ready.

After his playing days ended, Howe was a Texas Rangers coach from 1985 to 1988. The next year he was back with the Astros as manager. He managed them for five years, from 1989 to 1993, finishing third in the division in his first and last years. He did not manage in the majors the next two seasons, serving as a special assignment scout for the Los Angeles Dodgers in 1994 and a Colorado Rockies coach in 1995. When Tony LaRussa left the Oakland Athletics after the 1995 season, Howe was his successor.

Howe managed Oakland for seven years. Although there was a sudden drop-off in the performance of A's between his first and second years with them, from the second year onward the team improved each year. In 2000 they won AL West with 91 victories (Jason Giambi was the league MVP), in 2001 they finished second with 102 victories but made the post-season as the American League's Wild Card, and in 2002 they won the division again with 103 victories. In the film Moneyball, based on the book of the same name by Michael Lewis, he is portrayed by the late Philip Seymour Hoffman as a glorified figurehead, resistant to any and every new method Billy Beane wants to adopt with the A's but managing because the team needs a guy titled the manager. Beane allowed Howe to depart after the 2002 for a big money deal with the New York Mets.

Howe's tenure in Flushing lasted all of two seasons (2003 and 2004), in which he finished under .500 each year. He was thought to be near the top of the list to be the Pirates manager in 2006, but ultimately was not hired. Howe joined the Philadelphia Phillies as third base coach after the 2006 season, but less than a month later, he left the Phillies to serve as the Texas Rangers bench coach under skipper Ron Washington in 2007.

Howe was named hitting coach of the Chinese national team for the 2013 World Baseball Classic.

In May 2020, he announced that he was hospitalized with the COVID-19 coronavirus. At least, he was well enough to discuss his condition with reporters from a local Houston, TX radio station.

"Former managers with the status of Howe and Leyland don't look for jobs. The jobs look for them." - Paul Meyer, Pittsburgh Post-Gazette