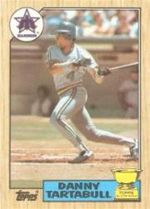 Danny Tartabull had a 14-year career in the major leagues, hitting 262 home runs.

He was a big star in the days before expansion, with the biggest salary in major league baseball in 1992, the result of signing a big free agent contract with the New York Yankees. However, although he was only 32 in 1995, he was not able to keep up his production in the mid-1990s mainly because of a variety of injuries. His career ended after he broke his foot in the first week of the 1997 season with the Philadelphia Phillies. He almost came back in 2000 with the San Diego Padres.

His best year was 1991, when he led the American League in slugging, was 10th in the league in batting average, and was on the All-Star team. On July 6th, he hit three homers in a 9-7 loss to the Oakland Athletics; that made him the last Royals player to have a three-homer game in the 20th Century, and the last until Kendry Morales did so again on September 20, 2015. He hit .316 with 35 doubles, 31 homers, 78 runs scored and 100 RBIs that season. He had two other seasons in which he hit 30 or more homers, 1987 when he hit 34 for the Royals, and 1993, when he hit 31 for the Yankees. He also had 100 or more RBIs five different times - the three years he hit 30+ homers, as well as 1988 with Kansas City and 1996 with the Chicago White Sox. That 1996 season was quite a comeback year for Danny, as he had been limited to 83 games the previous year, when he hit only .236 with 8 homers and his career appeared over. However, it turned out to be a final hurrah, as he was injured early the next year and never played again, his career over at only 34.

Tartabull had broken into the majors as a middle infielder, but was quickly moved to the outfield because of his mediocre fielding. In 1985, playing for the Calgary Cannons of the Pacific Coast League, he became the first shortstop at any level of professional baseball to hit 40 home runs since Ernie Banks accomplished the feat with the Chicago Cubs in 1960. He had come to the Seattle Mariners from the Cincinnati Reds via the short-lived Free agent compensation draft, as the Mariners' compensation for losing pitcher Floyd Bannister to the Chicago White Sox after the 1982 season. He was the son of Jose Tartabull and brother of minor league outfielder Jose Tartabull Jr..

He appeared on Seinfeld as himself.