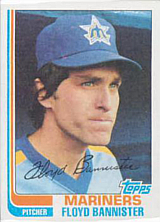 Much was expected of pitcher Floyd Bannister after he was selected by the Houston Astros with the first overall pick in the 1976 amateur draft. He did have a solid big league career, winning 134 games over a 15 year career, but he also lost 143.

Bannister is the only major leaguer born in Pierre, SD, as of 2019. Out of high school, the Oakland A's took him in the third round of the 1973 amateur draft but he did not sign. He attended Arizona State University the same years that Ken Landreaux was there. He won Gold with Team USA in the 1974 Amateur World Series; his son would wear the USA uniform 31 years later. After being picked in the 1976 draft, Bannister pitched 7 games that summer, his only games in the minors, before coming up to the majors in 1977. The first minor league team was the Covington Astros, where he gave up 0 runs in 13 innings, striking out 27. Moving up to the Double A Columbus Astros, he had a 1.50 ERA in 24 innings, and then in Triple A Memphis, he had a 1.50 ERA in 6 innings.

At age 22, in 1977, less than a year after leaving college, Bannister was a starting pitcher for the Houston Astros. In his first year, he went 8-9 with a 4.04 ERA. In his second year, he started only around half his games, with a 4.81 ERA and a record of 3-9. He had illness and injury problems. One might have thought that the Astros would be willing to wait for a promising young 23-year-old pitcher to develop, but they traded Bannister to the Seattle Mariners for shortstop Craig Reynolds after the 1978 campaign. Floyd spent four years in Seattle, with his most impressive years coming in 1980, when, despite a 9-13 record, he had an ERA of 3.47, and in 1982, when he had an ERA of 3.43 with a record of 12-13. He was named to the All-Star team and led the American League in strikeouts.

After the 1982 season, Bannister signed as a free agent with the Chicago White Sox and was a key factor in their division-winning season in 1983. After going 3-9 with a 4.76 ERA in the first half, he went 13-1 with a 2.23 ERA in the second half, winning 9 straight at one point. He started Game 3 of the 1983 ALCS against the Baltimore Orioles but was saddled with a loss after giving up three runs in six innings. He stayed five seasons with the White Sox, going 16-11 in his last year with them in 1987. He threw a one-hitter for the Sox on September 13, 1987, against the Seattle Mariners. The only hit was a 3rd-inning single by Harold Reynolds as the White Sox won, 2-0. Mark Langston only gave up 2 hits, both solo home runs, for the M's.

Bannister was traded after the 1987 season to the Kansas City Royals, where he stayed two years. He was slowed by injury problems in 1989. In 1990, he went to Japan as a free agent with the Yakult Swallows and pitched in 9 games, with an ERA of 4.04 and a record of 3-2. In 1991, Bannister came back stateside and was signed by the California Angels, appearing in 16 games in relief with an ERA of 3.96. He also was in the minors for 7 games for the Palm Springs Angels (0-3, 6.59), giving him a career total of only 14 games in the minors. In 1992, his last major league season, he appeared in 36 games in relief with the Texas Rangers.

In the winter of 2005-06, Bannister was on a short list of candidates being considered for the position of pitching coach for the Arizona State University team.

His son, Brian Bannister, made his big league debut with the New York Mets in 2006 and spent the next five years pitching for them and the Kansas City Royals. His brother-in-law, Greg Cochran, was a pitcher in the New York Yankees chain. Julio Franco played with both Floyd and Brian Bannister.