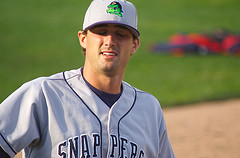 Berg made his debut in the Claxton Shield in 2003 as a late substitute when Adam Burton retired. Berg was 2 for 13 with 3 walks, 2 errors and 3 steals in 4 tries. He was on the Aussie team that won the 2003 Oceania Championship. He then came to the US for college baseball. The Minnesota Twins drafted him in the 30th round in 2004. 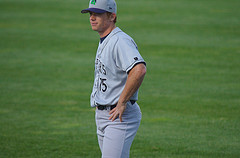 Berg starred in the Claxton Shield in 2008, hitting .400/.429/.750 with 3 home runs, second to only former Olympic Silver Medalist Tom Brice. Daniel was picked for the Australian national team in the 2008 Final Olympic Qualification Tournament and played regularly. His four games at third base led the team (one ahead of Glenn Williams); he also played two games in left, one at DH and one at catcher. Berg batted .308/.367/.462 with 7 runs in 7 games. He tied Kuo-Hui Lo for 7th in the tourney in runs and was second on his team behind Brice. Berg went 3 for 5 with 2 runs and 3 RBI in a win over Team Canada, the tourney champs. Australia fell short of a spot in the 2008 Olympics despite Berg's performance.

Daniel split the 2008 campaign between the Fort Myers Miracle (.279/.381/.414 in 67 games) and New Britain Rock Cats (.255/.327/.319 in 15 games). He played every position except for shortstop, center field and pitcher during the year. Berg was on the Australian roster for the 2009 World Baseball Classic. He backed up James Beresford at second base and struck out in all three of at-bats; he also made an error.

In 2009, Berg hit just .210 in 60 games between New Britain and Fort Myers. He was designated for assignment by the Twins and ended the year playing with the Grand Prairie Air Hogs of the independent American Association.