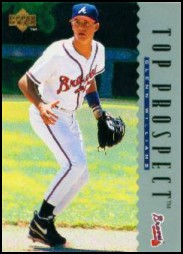 One of relatively few major league players born in Australia, Glenn Williams appeared on both the 2000 and 2004 Olympics teams fielded by Australia. He also made a notable major league debut with his bat in 2005: he hit .425 in 40 at-bats with the Minnesota Twins. Defensively, he made 2 errors in 12 games at third base. Unfortunately, he dislocated his shoulder on July 1st, and was disabled for the rest of the season. He had surgery in September and played in the minors in 2006.

As he failed to return to the big leagues in later years, his career ended with a batting average over .400. Williams holds the post-1900 major league records for most at-bats, and most hits, in a career in which the batter hit .400 or better: he collected 17 hits in his 40 at-bats. Herb Goodall was 19 for 45 in the 19th century.

He spent 3 years playing infield for the Syracuse SkyChiefs, with 23 home runs in 2004. After the season he became a free agent and signed with the Twins, who sent him to their Triple A club, the Rochester Red Wings, where he hit .303 in 48 games. He got to the majors that year for the only time in his career.

During the 2007 Baseball World Cup, Williams was the cleanup hitter for Australia and batted .286/.333/.500 as they finished 6th, their highest ever to that point. Williams drove in 8 runs, tying Luke Hughes for second on the team, one behind Justin Huber.

Williams hit .400/.483/.400 for Australia in the 2008 Final Olympic Qualification Tournament. He was 3 for 4 in their win over Team Canada, Canada's only loss of the event. Australia tied for 4th in the tourney and failed to make the cut for the 2008 Olympics.