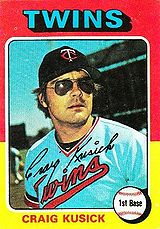 In 1972, Kusick put up a .281/~.382/.465 line for the Charlotte Twins then split the next three years between the Tacoma Twins and Minnesota. He hit a fine .305/~.428/.518 for Tacoma in 1973 and led the Pacific Coast League with 103 walks and 144 games played. He scored 102, drove in 104 (two behind league leader Gene Martin) and homered 27 times (four behind Martin, second in the PCL overall). He was seventh in the league in batting average and presumably higher in both OBP and slugging. He made the league All-Star team at first base. He made his major league debut with the Twins at the end of the season.

In 1976 and 1977, he was a semi-regular as Minnesota's designated hitter and he showed some power, hitting 23 homers in 534 at-bats over the two seasons. His career OPS was a solid .734, for a 105 OPS+, good enough to play in the majors but not enough to play regularly at 1B-DH. He ended his major league career with a short stint with the Toronto Blue Jays late in the 1979 season. He also made one pitching appearance for the Blue Jays. That appearance attracted a bit of press coverage as he performed an imitation of "The Mad Hungarian", Al Hrabosky.

In 1980, the 31-year-old returned to the minors with the Hawaii Islanders and hit .305/~.453/.536 but did not get called up to San Diego. He tied for 7th in the PCL with 17 homers and his 95 walks were second to Craig Cacek. It appears that his OBP was the highest in the league that year by a fair margin. The next year, Craig hit .272 for Hawaii with 5 homers and 22 RBI and .250 with 5 homers and 16 RBI for the Evansville Triplets to conclude his career.

After his retirement from professional baseball, Kusick taught physical education and coached baseball for Rosemount High School in Rosemount, Minnesota for 22 years, leading the team to seven state tournament berths, including four consecutive years from 1993 to 1996. Diagnosed with leukemia, he stepped down from his teaching job before the 2004-2005 school year to concentrate on his treatment and to care for his ill wife, Sarabeth, who died in 2005. Kusick succumbed to leukemia in 2006, three days shy of his 58th birthday.