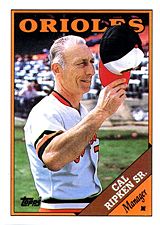 The father of Cal Ripken and Billy Ripken, Cal Ripken Sr. was a minor league catcher/outfielder from 1957 to 1962. His brother, Bill Ripken, was a minor league outfielder 1947-1949 and his grandson Ryan Ripken has also played in the minors. Cal Sr. began his managing career at the ripe old age of 25, taking over the Leesburg Orioles from Billy DeMars in 1961. He was famous for teaching numerous Orioles the Oriole Way which emphasized that hard work, professionalism, and a strong understanding of fundamentals were the key to success at the major league level. Ripken famously summed up the Oriole Way by saying "Perfect practice makes perfect."

He managed in the minors through 1974. He also managed the Orioles entries in the 1968-69 Florida Instructional League. Ripken was then a member of the Baltimore Orioles coaching staff from 1976 to 1986, serving as interim skipper for a game in 1985. He managed the O's in 1987 and for the first 6 games of the 1988 season - all losses. He returned to their coaching staff in 1989 and remained in that job through 1992.

He passed away in 1999. In 2001, his widow, Vi, and sons Cal Jr. and Billy established the Cal Ripken Sr. Foundation in his honor. It programs initiative for at-risk youth and underserved communities in the country. The Foundation organizes an annual fundraising gala with the support of the Major League Baseball Players Alumni Association, the Aspire Gala, whose 2017 edition raised over $3 million. The money is used to build Youth Development Parks and safe recreation facilities. It also supports initiatives aimed at promoting learning in science, technology and mathematics, and one aimed at teenage girls.

In July of 2012, his widow Vi, now 74, was abducted at gunpoint from her home in Aberdeen, MD, was bound up and kept overnight until found by police on July 26th in what was apparently a bungled kidnapping attempt. Police found it strange that no ransom demand was issued, and the kidnapper had apparently not known who he was abducting.

* Baukol Playoffs based on last 30 days of the season