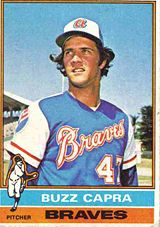 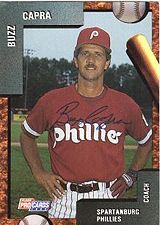 Buzz Capra began his major league career with the New York Mets in September 1971. He pitched 41 games over two-plus seasons with the Metsies, winning 5 while saving 4. On May 13, 1972, he recorded a 1-0 victory in a game in which his first RBI provided the only run, driving in Cleon Jones with a single against Hall of Famer Juan Marichal of the San Francisco Giants. Buzz was a member of the Mets' 1973 National League championship team, though he did not make a postseason appearance. He did still earn a claim to fame during it. During the infamous brawl between Pete Rose and Bud Harrelson in Game 3 of the NLCS, it was Buzz's Mets cap that Pedro Borbon inadvertently put on at the end of the fracas. Upon realizing his mistake, Pedro tore it to shreds... with his teeth.

Capra was sold to the Atlanta Braves in 1974. He broke out something fierce, finishing with a 16-8 record and 137 strikeouts in 39 games (217 innings) while leading the National League with a 2.28 ERA. Almost immediately after this spike in workload (Buzz had only tossed 95 big league innings the prior two seasons), Capra was beset by arm trouble and ended his career in 1977, without regaining his effectiveness. He was released in spring training in 1978 and spent the year selling snow blowers and lawn mowers. He attempted a comeback in 1979, but again did not make it out of spring training.