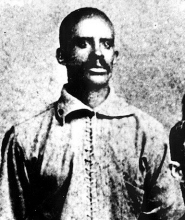 Inducted into Hall of Fame in 2022

The first black professional baseball player, Bud Fowler debuted in the 1878 International Association and went 2 for 13 for the Lynn, MA club. He also went 0 for 3 for Worcester of the New England League before playing semipro baseball for five years.

In 1884, Fowler hit .302 for Stillwater of the Northwestern League, topping the circuit with 57 hits. In '85, Fowler was the second baseman for the Keokuk Hawkeyes of the Western League and then for Pueblo of the Colorado League. He hit just .222 at each stop with no triples or homers in 13 total games. The speedy infielder signed with the Topeka Capitals for 1886, also in the Western, and hit .309. He led the league with 12 triples. His average was comparable to that of future big-league starters like Patsy Tebeau and Perry Werden, each of whom batted .317.

1887 saw Fowler in the International League, where he hit .350 (counting walks as hits) for the Binghamton Crickets and scored 42 runs in 34 games. While a good hitter for one of the top minor leagues, Fowler was let go when racist white players refused to play alongside him. He signed on with Montpelier of the Northeast League and hit .452.

In 1888 Fowler put up a .294 mark and stole 22 bases for Crawfordsville and the Terre Haute Hoosiers in the Central Interstate League and .343 for Santa Fe of the New Mexico League. In 1889 he was with Greenville of the Michigan State League, scoring 93 times in 92 games and hitting .302. He stole 46 bases and had a career-high 22 doubles.

He continued to bounce from league to league, hitting .322 for Galesburg in the Central Interstate in 1890 then going to the Two-I League (his 10th minor league in 7 years) where he played for Galesburg and Burlington, batting .314.

In 1891 only two black players appeared in the minors as Jim Crow laws were popping up all over. In 1892 Fowler returned to the minors as the lone black in minors in the 1892-1894 period. He hit .273 for Lincoln and Kearns of the Nebraska State League and led the league with 45 steals.

He played for one of the first Negro League powerhouses in 1895 with the Page Fence Giants and at age 47 he made his debut against a big-league team. He went 1 for 8 in two games against the Cincinnati Reds though the Cincinnati Inquirer said he was "as spry and fast as any man on the field." He left the Giants in July when a couple minors briefly reintegrated - the first black minor leaguer in three years, he hit .331 for Adrian and Lansing of the Michigan State League and scored 40 times in 31 contests. That was the end of a long minor league career that saw him play in a dozen or more leagues over the span of three decades. Within a few years, the minors would be emptied of black faces until 1946 when Jackie Robinson broke in with the Montreal Royals. Overall, Fowler hit .308 in 465 games in the minors, scoring 455 runs and stealing 190 bases.

In 2022, he was elected to the Hall of Fame as part of the "Early Baseball" ballot held by the Veterans Committee.

Sources include The Complete Book of Baseball's Negro Leagues by John Holway and The Minor League Register ed. by W. Lloyd Johnson